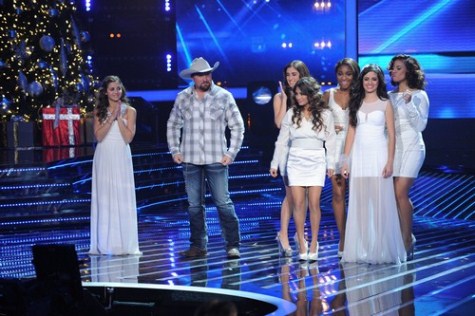 X-Factor USA’s final performance show aired last night. It wasn’t spectacular, nor was it surprising; instead, the three remaining acts stayed within the boundaries of their niche and continued to carve out their future in the industry. We also have an update on our pre-winner poll from Tuesday. At the time of writing this article, Carly stands at 64.78%, while Tate is trailing far behind 20.44% of the vote, and Fifth Harmony is in a distant third with 14.78%. The numbers do not lie, but votes do. If there’s even an inkling of an upset in the competition, the prize would go to Tate Stevens. It’s a very, very small possibility, but it is there nonetheless. Read our final X-Factor USA review and remember to vote in our official “WHO WILL WIN X-FACTOR USA?” poll.

Carly Rose Sonenclar – Mentored by Britney Spears – Feeling Good & How Do I Live Without You & Hallelujah – There’s no doubt in our minds (especially after Hallelujah) that Carly will win this competition. All three songs worked well with what Carly has been able to establish – a brand of professionalism and child-prodigy vocals. She has done enough to win the competition and out of all three, she is most deserving of the title. If Carly does not win X-Factor, it will be the biggest upset in reality television history. She is a true superstar and has showed us every week why she deserves the number one position on one of the greatest reality TV shows in the world. Tonight, Carly will be the happiest kid on the planet, because not only will she be $5 million richer, she’ll also be one of the biggest music stars on the planet. FINAL WORDS – It has been a pleasure to watch Carly every week, as for the first time in recent years, there was a true star on that stage. She broke boundaries, blasted away the competition, and held her own against the other acts with the biggest songs in the music industry. Carly isn’t just a star; she’s a supernova.

Tate Stevens – Mentored by L.A. Reid – Anything Goes & Party In Slow Motion & Tomorrow – Tate will become a massive country star in his own right. There’s no denying that Tate has a very special quality to both his voice and his personality. Unfortunately, there’s also no denying that Tate will not win this competition. Carly has already clinched the deal – it’s overs kadovers for Tate. He found his niche and he found his voice amongst the cacophonous roar of the masses. It will be up to him to take his second place position and build a career from this platform. FINAL WORDS – Over the months of competition, we’ve grown to love Tate. His endearing personality and charming vocals have only further increased our support for him. We want to see him become a successful recording artist and we want to see him become a country music legend. He knows how to do it, he just needs to grab it and move away from those relentless country music clichés.

Fifth Harmony – Mentored by Simon Cowell – Anything Could Happen & Give Your Heart A Break & Let It Be – Fifth Harmony is one of the best groups in X-Factor’s history. They’ve been able to carve out a group act niche in a very short amount of time. Fortunately, this is not the end of Fifth Harmony. If Simon Cowell has any business sense – and he does – he will make Fifth Harmony the US version of One Direction. They have a massive fan bloc, especially in the teenage demographic, so a record deal would be the best decision for this group in the end. FINAL WORDS – If these girls are able to choose the correct songs in their post-X-Factor careers, they will be one of the biggest girl bands on the planet. They have amazing potential and great vocal ability. Unfortunately, Cowell lost the plot with song choices during the competition and made Fifth Harmony a contrived and disjointed group. They have a future; in fact, they are the future of modern pop music.

It’s been a great ride Celeb Dirty Laundry readers. X-Factor’s second season was absolutely magnificent and we hope you enjoyed it as much as we did. We’d like to officially thank you for your continued X-Factor USA news, recaps, and reviews support. We wouldn’t have been able to enjoy this season as much as we did without you, the reader. Remember to vote in our final X-Factor USA poll of the season and to let us know in the comments what you thought of the finale. We tune in so you don’t have to tune out.