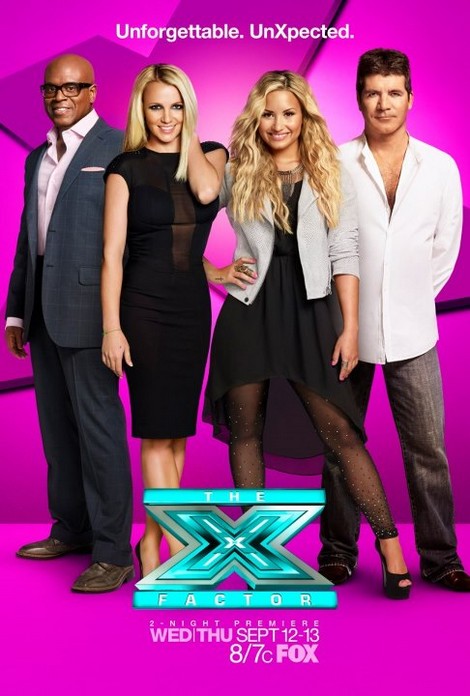 The show we’ve all been waiting for finally arrived. The X-Factor USA’s second season premiered last night to the ecstatic cheers of reality television aficionados, such as all of us here at Celeb Dirty Laundry. The second season’s auditions kicked off in Austin, Texas and in San Francisco, California. The auditions ranged from beautiful and heartfelt to creepy and deranged. There were several first episode front runners who immediately stood out from the pack due to their impeccable vocal artistry.

Paige Thomas, a 21-year-old single mom, did a cover of Mary J. Blige’s catchy hit “I’m Going Down” to across the board praise from the judging panel. Her vocals were strong and filled up with a warm vibrato near the bridge. Britney Spears’ face melted (why did she look so manly?) as Paige delivered the money notes during the chorus with a gritty, gravelly and bluesy appeal. The performance was obviously liked by the entire arena and most importantly by Simon Cowell, who lauded Paige for her “commercial appeal”. The performance was too cookie cutter for our liking. Mary J. Blige works well because of her attitude and sturdy R&B vocals, but there were unfortunately several instances during Paige’s performance that her vocals slightly faltered, especially during the opening notes. This is to be expected from an audition performance, so we’re giving her 3 out of 4 for this one, but we know she’ll pick up in the later rounds. Paige received a 100% yes from the judges.

The most promising group audition of the night came from a boy band called Emblem 3, a trio of guys who fell from the catwalk of a commercial male modeling show. There was a very, very strong female cheering factor when the three guys announced their names and age. Demi Lovato looked smitten when they were being bashfully self-aware of their stage presence. Emblem 3 took the road less traveled and did an original song called “Sunset Boulevard”. Before we continue, the death blow to any talent show performance comes in the form of an original song, especially when the act writes self-indulgent and vanity project lyrics. However, this was not the case with Emblem 3. Their song was fresh, commercial and marketable. The lyrics were intelligible, exciting and catchy, but what Emblem 3 gained in sheer performance value, they lacked in basic vocals. Yes, the song is not a vocal song per say, but it felt all over the place at times, especially with the Backstreet Boys-esque opening runs. The performance was slightly clichéd with the left-hand-air-pushing, but in no way was it unoriginal.  All four judges gave the trio a yes, but we’re giving them a “Maybe”, since we do not believe their original performance will be able to hold its own against the future group acts. 3 out of 4 for them!

Jenelle Garcia was one of the youngest acts of the night. Coming in at 18-years-old, Janelle wowed the judges with her rendition of “If I Was from Paris” by Grace Potter and The Nocturnals. Her performance filled up with power-grit and blow-away vocals at the opening of the song, which prompted Britney’s face to melt again. Jenelle, in our opinion, had by far the best vocal performance. She was the epitome of an “old soul”. Jenelle received critical praise for her performance, most notably from Simon Cowell who referred to her as a “young Pat Benatar”. All four judges gave Jenelle a resounding yes. We’re giving her an “of course” and a 4 out of 4 for her performance.

Jillian Jensen was the sentimental symbol of the night with her earnest performance of “Who You Are” by Jessie J. She drew tears and emotions from the judges and her family when she poured her soul into her performance. At one point, Demi remarked to Britney, “You can feel that pain.” Her performance became a personal journey and an anthem for the struggles she had to endure with bullies throughout high school. All of this was quite a courageous experience, but in reality, Jillian’s notes were slightly off key and her voice, even though interesting, became rattled near the end of the song due to the holding back of tears. One specific thing we have to note is that one could feel the pain and darkness in her voice, which is a sign of a true musician. All in all, Jillian delivered the most extraordinary performance of the night and if some of the pitch kinks become sorted, we bet this girl will be a huge inspiration and an integral part of the show. All four judges gave Jillian a yes, but we’re giving this courageous girl 3 out of 4

One of the most interesting contestants of the night was the 13-year-old Reed Deming, a Justin Bieber lookalike who first did a cover of Bruno Mars’ “Grenade”, but was stopped by Simon during the first few notes. According to Simon, the song was too affected. Production switched up the music and Reed did a cover of “It Will Rain”, again by Bruno Mars. The second time around little Reed was much more in control of his vocals, but he still lacked the experience of age in his vocals. All four judges said yes, but we would have given Reed 2 out of 4.

The worst of the bunch came in the form of Shawn Armenta, a 50-year-old who did a cover of “Candy Girl”. Armenta was so scary that Britney commented, “I feel uncomfortable having you on stage and looking at me…” It was a truly spectacular start to the second season. Stay with Celeb Dirty Laundry for a live recap of tonight’s episode and remember to bookmark us for up-to-date X-Factor news, reviews and spoilers.