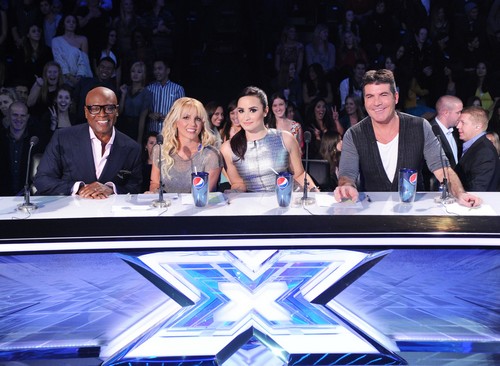 The X-Factor USA’s Thanksgiving episode delivered a bucket load of tears, emotion, and pride. The episode was wrought with quite a few misses, but the acts that were able to hit, did so in a way we’ve never seen before. Below is Celeb Dirty Laundry’s trusty review of last night’s performances. Tonight, one of these contestants will leave the competition. Our vote is on Paige Thomas and/or CeCe Frey. See below how your favorite did and let us know in the comments who you liked the best.

Diamond White – Mentored by Britney Spears – Because You Loved Me by Celine Dion – Celine Dion is one of those artists who shouldn’t be touched by an aspiring vocalist – she’s the Tina Turner/Whitney Houston/Aretha Franklin type. Fortunately for Diamond, this was the perfect choice during the Thanksgiving week. Her performance was emotional, pitch-perfect, and subtle. Diamond was able to lift out the Celine Dion nuances from the song and marinate them in her 13-year-old voice without sounding forced and pretentious. This old soul is the sleeping dragon, waiting to be awoken. OUR SCORE – 9 out of 10

Emblem 3 – Mentored by Simon Cowell – Secrets by One Republic – The Abercrombie & Fitch models were at it again last night! Their performance was harmonized perfectly, and everything was there to keep them afloat, but for some reason, Emblem 3’s crying voice pop vocals do not always feel as sincere as possible. Their vibratos are absolutely beautiful, especially at the closing of the notes, but there’s a general disconnect when they hit the crescendo of the song. They splinter from their contrived unity and become separate entities. We’re still waiting for that BAM moment we know Emblem 3 is able to deliver. They have potential; they just need to work on it. OUR SCORE – 7 out of 10

Arin Ray – Mentored by Britney Spears – Hero by Enrique Iglesias – Arin Ray hasn’t been able to live up to his promises. We think it might be a mentoring issue, but Arin really needs to move away from the soppy and sentimental ballads and find something that would suit his voice. He might also be an R&B prodigy, but his performance of Hero was like an Enrique Iglesias tribute act at a Celine Dion concert in Alaska. It was too technical and contrived for the already sentimental lyrics of the song. OUR SCORE – 6 out of 10

CeCe Frey – Mentored by Demi Lovato – Wind Beneath My Wings by Bette Midler – CeCe, oh CeCe… Her shaky rendition of one of the greatest songs of all time was a slap in the face. She missed 80% of her notes, her voice faltered and became nasal and her “sentimentality” and expression of emotion came off as contrived and desperate. This might sound like we’re absolutely horrible people, but Thanksgiving week isn’t there for contestants to win sympathy votes, it’s there to see how easily contestants are able to relate with their emotions and bring it across in a song. Nothing of this happened during CeCe’s performance. She should have left already. OUR SCORE – 4 out of 10.

Fifth Harmony – Mentored by Simon Cowell – I’ll Stand By You by The Pretenders – Okay, we might receive Anthrax in the mail for this, but these girls weren’t as good last night. The song has been done to death, so the originality of Fifth Harmony faded out and became karaoke. It felt like a slumber party at a house with teenage girls who sing in the show choir. The “sixth harmony”, the choir, did not really add meaning and/or weight to the performance. Sorry girls, but you have to do better next time. OUR SCORE – 7 out of 10

Beatrice Miller – Mentored by Britney Spears – Chasing Cars by Snowpatrol – This is what we’re talking about! This is the performance we were waiting for from Beatrice! Her vocals were emotional, sincere, haunting, and somber. The hoarseness to her voice, the over-the-top notes, and the blast of air near the end, made this one of the best performances this little one has ever delivered in this competition. The holy trinity– Beatrice, Diamond, and Carly – will blow the other contestants out the water. Thank you, thank you, thank you Britney! OUR SCORE – 10 out of 10.

Vino Allan – Mentored by L.A. Reid – Bless The USA by Lee Greenwood – This was one of the most magnificent performances we’d ever seen from Vino. For the first time, Vino broke loose from that bad Nickleback shell and gave us what we paid for. The song was about freedom, and hope, and beauty, and pride, and Vino delivered on all of it. There was a sweet sincerity to his performance, and by the end of it, I found myself standing with my hand on my heart. Funny thing is… I am not even an American.  OUR SCORE – 9 out of 10

Paige Thomas – Mentored by Demi Lovato – Everytime by Britney Spears – We’ve been extremely hard on Paige in the past few weeks, and we’re going to be hard on her again today. It’s perfectly normal to have emotion on stage. In fact, it is extremely important to have emotion on stage, but Paige’s emotions took hold of her and settled on her vocal cords. Her upper notes were extremely sharp, especially when she hit the chorus, and her lower register wobbled a bit and fell through the floorboards of control. We think this might be the end of Paige. Sorry girl, but you had so much potential. OUR SCORE – 4 out of 10

Carly Rose Sonenclar – Mentored by Britney Spears – Somewhere Over The Rainbow – We’re not going to call Carly an alien, because that’s cheesy. We are, however, going to call Carly one of the best performers in the history of reality television talent shows. No words are able to describe this performance. It’s beyond comprehension. OUR SCORE – 10 out of 10

Here’s a reminder of the popularity standings of last week:

Who do you think will leave tonight? Do you think Paige has long overstayed her welcome? Let us know your thoughts in the comments below.