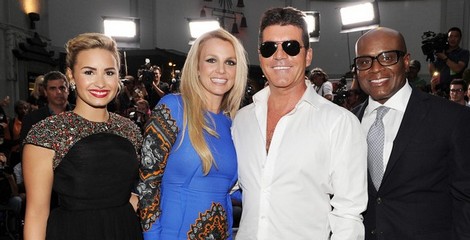 Tonight on FOX The X Factor USA premiere week continues with ‘Auditions #2.’   The new season dawned on us last night with much fanfare last night and gave us some of the most interesting performers, including Reed Deming (the 13-year-old Justin Bieber lookalike), the “boy band” Emblem 3 and the poignant back story of Jillian Jensen, who was bullied throughout her high school career, but overcame her struggles to audition for the X-Factor judges. Tonight’s second episode promises to be more exhilarating, more emotional and more exquisite. If you missed the episode you can read our full and detailed recap here!

Celeb Dirty Laundry is bringing you the second episode pre-cap right here, the live recap tonight and a full review of the night’s auditions tomorrow morning. Let’s get started, shall we?

Last night, The X-Factor went up against The Voice’s strong third season. In this, the first ratings war of the new television trimester, The X-Factor unfortunately lost out to The Voice in viewership figures. The Voice drew 10.7 million viewers during its episode and The X-Factor drew only 7.5 million viewers during its first hour. Both shows were expected to lose one point from their respective ratings, mostly due to competing against one another in the same time slot. In The X-Factor’s defense, it was a new season with brand new judges and viewers are a bit nitpicky when it comes to new faces. The Voice, however, had some of its most memorable contestants in the history of the series last night, so we hand it to Mark Burnett for bringing the weapons of mass destruction. The X-Factor tied up with The Voice during its second hour, when The Voice’s third blind auditions finished and the episode came to a close. The X-Factor was unfortunately down by 21% compared to its first season premiere.

Tonight’s The X-Factor USA episode will have to bring out the big guns as the auditions move to a new city with brand new tears, faces and scary contestants. We saw during the first episode that this season promises to change the way we watch reality television, especially with the acerbic responses from the judges and the not so goody-two-shoes Britney Spears. Luckily for The X-Factor, it will lead into Glee’s much anticipated fourth season tonight, so the lead-in might kick up a dust storm surrounding the viewership numbers.

Stay tuned to Celeb Dirty Laundry for a full live recap of tonight’s episode, followed by our live recap of Glee afterwards. We will keep you up to date on all X-Factor news, reviews and spoilers and make sure to check back here regularly for more information on your favourite television shows!  So don’t forget to come back to this spot at 8PM for our live recap of The X Factor USA Season 1 Episode 2 recap at 8PM EST!

Tonight’s recap:  Tonight is the second night in a row that viewers’ get to sample the new X Factor complete with new young judges, Demi Lovato and Britney Spears joining Simon Cowell and L.A. Reid.

Johnny Maxwell takes the stage first singing an original song about not letting people bring you down. Actually he raps through half of it and seems to definitely have some real raw talent. L.A. Reid even joins in the chorus with him during the last verse and thinks he is amazing. Britney thinks he’s fun to watch and she sees a record in his future. Demi says he has swag and is really cute. Simon tells him he was a bit worried in the beginning but Johnny definitely has ambition and he gets four yeses from the judges.

Obviously somewhere along the way someone lied to Lexa Berman and told her she has vocal ability. . She thinks she is amazing and hits on Simon, who refers to her as Jersey Shore meets Kardashians. She sings in one tone until Britney pleads for the noise to stop. Demi tells her she’s too confident and can’t sing.

Jason Brock is kind of like a dark haired Elton John. He is quirky and flamey and super cocky. After talking himself up and fantasizing about his own fantasy stage show with glitter and dancers galore, he finally sings New York State of Mind and cracks it out of the theater. Absolutely magnificent and he ends with a standing ovation from everyone but Simon. 4 judges say yes, of course.

Pat Ford is a crazy (CRAZY) Britney Spears fan. First he brings her flowers on stage with him and then he crucifies her song, “Circus”. After professing his love for Brit Brit 5 times he leaves the stage brokenhearted.

Sometimes a young kid takes the stage and just blows the roof off the place and tonight her name was Carly. The 13 year old belted out a very mature rendition of Nina Simone’s Feelin’ Good that had the audience on their feet before the song even ended. Britney called her a little diva and said everyone is in love with Carly. L.A. told her that she’s 13 but with an old soul. Simon proclaims that a star has just walked out onto the stage and Demi wants to buy her music now. Of course all four vote yes.

Tune in next week for more stars in the making on an all new X Factor.