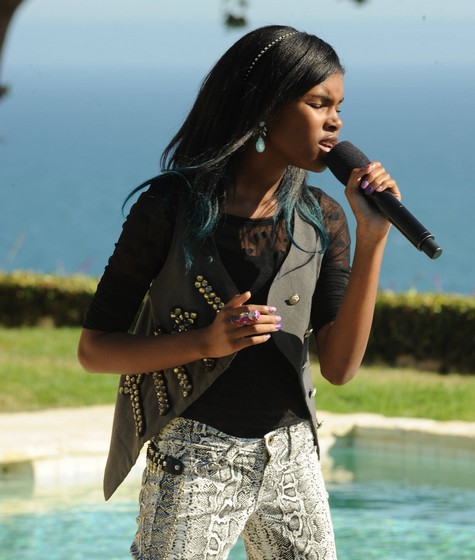 The final audition phase is almost over. Demi Lovato and Simon Cowell judged their acts on Wednesday, and last night it was L.A. Reid and Britney Spears’ turns. Wednesday night’s performances pale in comparison to the insane amount of talent we witnessed during last night’s performances. This is the strongest group of contestants so far in the competition and we’re glad they were given a chance by the judges. There were a few duds (Tara Simon and James Tanner), but most of the contestants gave their final dying falsettos for a chance in the live rounds. Celeb Dirty Laundry is once again bringing you a full performance review of last night’s performances with our full critique of each one. Let’s get to it, shall we?

Jason Brock – Mentored by L.A. Reid – Big Girls Don’t Cry by Fergie: Jason is one of Celeb Dirty Laundry’s early favourite contestants. His confidence, glam-coolness and Adam Lambert-esque theatricality has pushed him ahead of the competition, and Jason’s gravel and musical theatre falsettos have earned him a spot in the top 24 of the competition. Jason’s performance was really exceptional. He exerted an unparalleled control over his voice and dipped into his soothing and sunbathed lower register. Jason is an exemplary performer. If he is able to shake the theatricality, the Adam Lambert and add a dollop of emotion, he might be heading for a win. We’re giving Jason 5 out of 5 for his memorable and remarkable performance.

David Correy – Mentored by L.A. Reid – Domino by Jessie J: David broke our hearts back in the audition round, scared us in the Boot Camp round and demanded our attention in the Judges’ Homes round. The unorthodox singer took on a current pop hit in the form of Domino – a song that demands structure, control and perfect pitch. David delivered on every aspect of this difficult pop ballad. His voice raised the bar and hit the stratosphere of emotive vocals. 5 out of 5 David.

Daryl Black – Mentored by L.A. Reid – She’s Gone by Hall and Oates:  The mostly under-the-radar Daryl Black took on a Hall and Oates classic. His performance was strongly influenced by R & B sub-currents and slightly out of control runs. Daryl delivered a very good performance. We’re giving Daryl an excellent 4 out of 5!

Tate Stevens – Mentored by L.A. Reid – Back At One by Brian McKnight: Tate was the country superstar who absolutely slaughtered all of his auditions. He is most infamous for his Willie Jones sing-off, where poor Willie forgot half of his lyrics. Tate’s previous perfect phrasing was marred with off-pitch in the opening of the lyrics. His voice still did a heap load of justice to the Brian McKnight classic. If Tate is able to control his phrasing and pitch, he might be the country star to watch this season. We’re giving Tate an unfortunate 3 out of 5.

Vino Alan – Mentored by L.A. Reid – Sober by Pink: The under-dog Vino has been captivating us throughout the audition rounds and the emotional Boot Camp rounds. He competed against David Correy in the sing-offs during Boot Camp and completely blew us away. Vino did his vocals justice, once again, with his extremely emotional and sincere performance of Pink’s mega-hit. His deep and unaffected rock voice cut itself to the bone during the performance. Thank you Vino, thank you for being one of the first contestants to give us cold chills. We’re giving Vino 5 out of 5 for his magnificent performance.

Tara Simon – Mentored by L.A. Reid – Reason to Live by Hoobastank: Annoying since the first loss of car keys, Tara has self-indulgently crawled her way through the competition and neurotically bumped herself into the top 24. Her extremely affected voice was marred with off-pitch runs and terrible phrasing. Tara, it’s “ME”, not “MEH”. It’s “BE”, not “BEH”. It’s “YOU”, not “YOH”. Good luck. We’re giving her 1 out of 5.

Diamond White – Mentored by Britney Spears – I’m With You by Avril Lavigne: The incomparable Diamond White stole our hearts back in the audition round, but completely ripped out our souls during the Boot Camp phase of the competition. She is one of the best singers in the Teen group and has been lauded by the judges for her mature performances. Her performance was absolutely flawless. Diamond’s voice is an unparalleled weapon of mass destruction. This is the reason we watch X-Factor. Obviously, we’re giving Diamond 5 out of 5.

Reed Deming – Mentored by Britney Spears – Hey There Delilah by The Plain White T’s: This Justin Bieber lookalike has been going from strength-to-strength in the competition, bulldozing his way into the top 24 and has gained a smattering of fans during his short run on the show. Reed’s voice, even though it is very mature for his age, just isn’t at the same level as several of the other Teen group contestants. His pitch is off with several of the notes and he comes across as too musical theatre and technical. We’re giving Reed an unfortunate 3 out of 5.

James Tanner – Mentored by Britney Spears – Party Like A Rockstar by Shop Boyz: Unfortunately for this under-the-radar One Direction lookalike, we doubt he would ever make it through to the live rounds of the competition. His performance was sub-par, self-indulgent and awkward. Sorry James, but look on the bright side, at least Nick Youngerman is still worse than you! We’re giving James a horrible 1 out of 5.

Arin Ray – Mentored by Britney Spears – Starships by Nicki Minaj: This previous X-Factor inTENsity star was over-hyped during his audition and Boot Camp rounds, but during this, the most important pre-live audition round, Arin delivered. The market is wide open for this young star to fly, fly, fly. We’re excited. His rendition of Starships was even better than Nicki Minaj’s. Let’s take over the world, shall we? We’re giving him 5 out of 5.

Beatrice Miller – Mentored by Britney Spears – Titanium by David Guetta Feat. Sia: The aptly named Beatrice blasted her way into the competition without much hype. However, Beatrice’s performance of the overplayed Titanium was one of elegance and maturity. Her voice settled well into the strong tone of the Sia’s original version. Her beautiful falsettos and mature vibrato held its own against the other contestants. We’re giving Beatrice 4 out of 5 for her excellent rendition.

Carly Rose Sonenclar – Mentored by Britney Spears – Brokenhearted by Karmin: The final contestant of the Teen group was Carly Rose, one of the better contestants of the bunch. We were blown away by Carly’s audition round performance and vocal maturity, so the Judges’ Houses phase of the competition was sure to be no stress for Carly’s voice. You know what’s weird? Even though the song is non-relatable at times, one connects with this song when Carly sings it. This is the sign of a great artist. Carly’s performance was infused with super-controlled vocals and one of the most beautiful tones in the competition. We’re giving her 5 out of 5.

There we have it. That’s the top 24. Who was your favourite? Who do you want to see in the live rounds? Who do you think deserves a shot at redemption? Let us know all of your thoughts in the comments below and remember, stick to Celeb Dirty Laundry for all of your X-Factor news, reviews, recaps and spoilers.