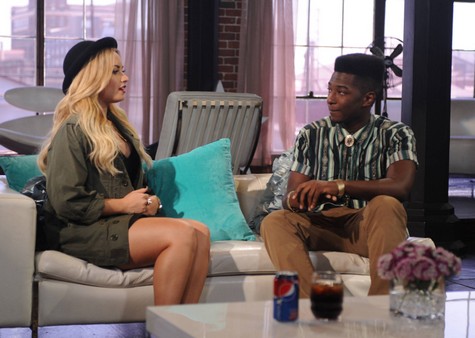 The X-Factor USA had to be postponed last night due to post-season baseball (or something like that), but we’re hardened troopers here at Celeb Dirty Laundry and a bit of baseball won’t give us sad faces. Unfortunately, there were no performances to review during last night’s episode, but we’re able to bring you a breakdown of who made it through to the live rounds, a little bit about their history on the show and how far we think they’ll go in the competition.

Beatrice Miller – Mentored by Britney Spears – Beatrice is a 13-year-old school student from Maplewood, New Jersey. She performed the overplayed hit Titanium by David Guetta during the Judges’ Homes phase of the competition. HOW FAR WILL SHE GO? If Beatrice is able to blast away her competition with song choices for her demographic, we think she’ll make it to the 4th and/or 5th week.

Carly Rose Sonenclar – Mentored by Britney Spears – Carly grabbed our attention when she performed Feeling Good by Nina Simone during the audition round of the competition. Her maturity and legendary vocal channeling puts her in the front of the pack. HOW FAR WILL SHE GO? Carly has a massive future on the show. If Britney is able to nourish Carly with strong vocal performances and well-known, current songs, we expect her to make it to the 6th week of the competition.

Arin Ray – Mentored by Britney Spears – Arin went through the motions during the first season of X-Factor USA when he was part of the now defunct inTENsity, a super group of ten kids that failed miserable during the first season of the show. His attractiveness and pop star looks will lock a specific voting demographic into place. HOW FAR WILL HE GO? If Arin is able to improve vocally, he has a good chance of making it to the finals of The X-Factor USA.

Diamond White – Mentored by Britney Spears – Diamond was one of our early favourites with her audition round rendition of It’s A Man’s World. She has been climbing the ranks of stardom over the past couple of weeks, getting ever closer to the top vocalist part of the pack. HOW FAR WILL SHE GO? If Diamond is able to keep her sincerity and humbleness, we’re predicting a top three finale.

David Correy – Mentored by L.A. Reid – David’s maudlin story and unorthodox looks catapulted him into the hearts of audiences and judges alike. His vocals require some work, but we’re expecting a voting bloc of die-hard David Correy fans during the live rounds of the competition. HOW FAR WILL HE GO? If David doesn’t become too controlled with the clichéd vocal mannerisms he is so accustomed to, we’re expecting David to make it to the 3rd (maybe 4th) week of live competition.

Jason Brock – Mentored by L.A. Reid – Jason’s over-the-top theatricality could be one of his biggest downfalls, but Jason’s eccentricity and strong vocals demanded attention during the preceding phases of the competition. HOW FAR WILL HE GO? If Jason drops the irking theatricality and becomes less self-indulgent during his performances, we’re looking at a potential winner of the show.

Tate Stevens – Mentored by L.A. Reid – Tate is the quintessential country star this year and has been able to hold his own against some of the high belters in the competition. The country demographic is one of the largest voting blocs in the entire USA, so we might see insane fan support for Tate. HOW FAR WILL HE GO? If Tate is able to wow audiences with interesting country renditions (think Scotty McCreery), he might win the competition. If not, we’re expecting a 5th/6th week elimination.

Vino Alan – Mentored by L.A. Reid – Vino’s voice captivated us and his underdog appeal sent ripples throughout the competition. Vino is one of the most interesting dark horses in this competition. Audiences love underdogs, so we expect Vino to have a strong support base of die-hard voters. HOW FAR WILL HE GO? If Vino is able to pull it together and build up some confidence during the live phases, he could quite easily land himself in the top 5 of the competition.

Jennel Garcia – Mentored by Demi Lovato – Jennel has been one of the most noteworthy contestants on this season of X-Factor. Her name is popping up on every blog/magazine/website that has to do with X-Factor, proving that she has a brawny fan base. HOW FAR WILL SHE GO? If Jennel is able to crawl out of the seminal classic shell and be more current, we’re expecting a win.

Willie Jones – Mentored by Demi Lovato – Willie doesn’t look like a country/vocal super star, but his 80’s Fame looks make him an interesting character that will hopefully stick around for many more months to come. The pop industry needs someone like Willie. HOW FAR WILL HE GO? If Willie is able to remember his lyrics and work on losing some of the forced technicality in his voice, Willie could be Tate Stevens’ biggest competitor this season.

Remember, our hypothetical predictions are loosely based on the current music market, previous voting trends and contestant popularity. We do not claim to have the answers to all of your X-Factor questions, but we are able to bring you a guideline based on hardened X-Factor research. If you like our X-Factor reviews, recaps, news and spoilers, remember to bookmark us and head back here if you feel like reading the best X-Factor reviews and recaps on the internet.