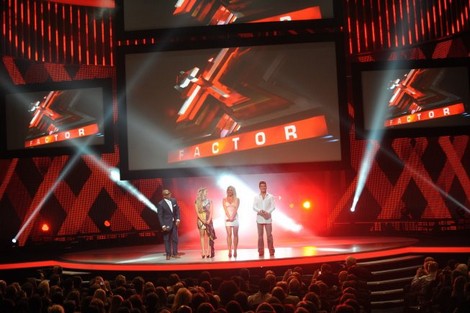 We had a sneaky suspicion Simon Cowell was on the verge of a nervous breakdown with the dwindling X-Factor audience numbers for the second season, but luckily for the acerbic judge, the numbers have since changed and are up to about 9.54 million viewers for the second week of the show. This is a steady increase which we expect to see rise during the coming weeks. The third week of auditions will air on Fox tonight and we have yet to see an arena exploding performance.

So far, most of the auditions have been above average at best and have been lagging behind the awesome Blind Auditions on The Voice. We have had entertaining performers and emotional auditions, with most of the contestants hailing from Austin, Texas. We’ve had Jeffrey Gutt, Willie Jones, Jillian Jensen and the quirky Quatrele Smith. We’ve seen contestants fall apart backstage, steal microphones and bitch about the integrity of the show. We’ve had Britney Spears, Demi Lovato, L.A. Reid and Simon Cowell. However, we’re still waiting for the big X-Factor bang that has been lost in translation this season. Are we over it? Is this it? Is this what we’ve been waiting for? Have we become numbed by reality talent television? Last year we struggled to watch X-Factor through the tears and emotions. This season we’re watching X-Factor with our eyes half-closed, drifting off to a blissful sleep.

Tonight’s episode will be a continuation and re-visit of the previous audition cities, with more than enough madness, self-indulgence and attitude to fill us up for a week. Gene Simmons’ (KISS) daughter Sophie Simmons will try out at the San Francisco auditions and we ensure you, this will be one of the most interesting auditions of the season so far. Gene Simmons has been a monster in the music industry and has allegedly slept with over 4,800 women. Kris Jenner still holds the record for most men in one lifetime. Her tally stands at 5001 men – excluding Bruce Jenner – so suck on that Gene! We have no exclusive information on whether Sophie Simmons will make it through to the next rounds, but we’re almost one hundred percent certain that she didn’t struggle to get through the preliminary casting process. Will Sophie make it? Will you be watching? Will tonight’s episode change The X-Factor for the better? Join Celeb Dirty Laundry for a live recap tonight and a full performance review tomorrow morning!

Let us know in the comments below if you’ll be watching and what you thought of our X Factor USA Season 2 Week 3 Precap?