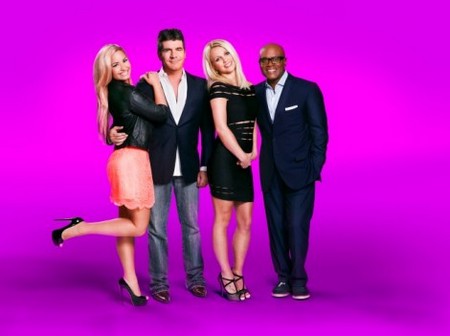 X-Factor USA’s first official voting night was wrought with poorly stylized performances, clichéd songs, and a horrid heap of off-pitch vocals. However, two acts saved the night from absolute disaster, as their performances broke away from the X-Factor mold and allowed the audience to connect with the music. Celeb Dirty Laundry is once again bringing you a full X-Factor review of the performances. We included our heavily researched commentary and official scores for your perusal. You’re allowed to disagree in the comments below, but please note, we did not base our commentary solely on the performances – we also took into account the judges’ critique and the comments on YouTube.

Arin Ray – Mentored by Britney Spears – Estelle’s American Boy – Arin is transforming into a superstar. His performance was world class, without a friggin doubt. The true mark of an artist is when one believes the lyrics, the music, and the emotion. Arin ticked all of these boxes. There’s still some work required on his pitch and vocals, but performance wise he is the dark horse in this competition. We bet a million girls the world over would like Arin to be their American Boy. OUR SCORE – 8 out of 10.

Paige Thomas – Mentored by Demi Lovato – Berlin’s Take My Breath Away – Paige’s vocals were exquisite on this clichéd song, but the performance was slightly too barren and dramatic. Paige didn’t come off as a vocal superstar worth $5 million; she came off as a top notch musical singer in a supporting role. The problem with Paige is that she’s being molded into a Rihanna clone. We don’t need another Rihanna – God knows we have enough of her already! Demi should do away with the OTT performances and simplify Paige’s voice. It definitely needs to be pulled back or she’s facing an early exit. OUR SCORE – 6 out of 10.

Vino Alan – Mentored by L.A. Reid – Percy Sledge’s When A Man Loves A Woman – Vino is an excellent musician, we give him that, but his performance was just too safe for comfort. There was absolutely nothing in Vino’s performance that we hadn’t seen done better by an American Idol or previous X-Factor contestant. He needs to find music that will break that stereotypically husky voice and completely transform it. OUR SCORE – 6 out of 10.

Emblem 3 – Mentored by Simon Cowell – My Girl/California Girl/What Makes You Beautiful – Innovative? Check. Pop stars? Check. Awesome mash-up? Check. Shameless One Direction plug? Check. Okay, it worked, we do agree with Simon’s choice in songs, but what the hell was up with the group disconnection? They didn’t come across as a unit, they came across as three guys dancing and singing on the pretty stage. Most “boy bands” work due to being a unit – a single entity that is able to cross all musical boundaries. These guys still don’t have that completely down and will have to work on that disconnection through the entire season of the show if they plan to change the world with their pop music. OUR SCORE – 7 out of 10.

Beatrice Miller – Mentored by Britney Spears – The Goo Goo Dolls’ Iris – Beatrice owned this song. Her rendition was captivating and wise-beyond-her-years. There was a slight emotional disconnection after the first chorus, but Beatrice picked it up and channeled the lyrics like an old soul. She’s not the best young singer in the competition, but her personality really does make up for it. Whoever is dressing Beatrice should be shot in the throat. OUR SCORE – 7 out of 10

Jennel Garcia – Mentored by Demi Lovato – Joan Jett’s I Love Rock N Roll – Did we die and go to Broadway? Was it you with the arsenic again Aunt Mildred? No, no, no. What happened to the Jennel Garcia we came to love in the first few episodes? Her performance was akin to a drunken Las Vegas showboat performance directed by a dead Liberace. It was farcical, parodied, and inhumane. Shame is on you, Demi. OUR SCORE  – 4 out of 10.

Tate Stevens – Mentored by L.A. Reid – Bon Jovi’s Wanted Dead or Alive – Country music might have died a sudden death on reality television shows after Scotty McReery’s win on American Idol, but Tate Stevens brought it back to our front door. He completely transformed Bon Jovi’s seminal hit and made it his own with a dollop of country twang. If Tate were to release this song right now, it would shoot straight to number one. There were issues with the vocals, pitch, and contrived performance, but as a radio artist, Tate would be a best seller. OUR SCORE – 7 out of 10.

Lyric 145 – Mentored by Simon Cowell – Mary Poppins’ Supercalifragilisticexpiallidocious – This group is quite easily one of the best groups in the history of X-Factor. Their performance was mind-bendingly cool and insanely difficult. We might be looking at the next Black Eyed Peas, America. This was absolutely faultless. OUR SCORE 9 out of 10.

Diamond White – Mentored by Britney Spears – Whitney Houston’s I Have Nothing – Our favourite kid in the whole wide world was brought back to the competition as a wild card. We were crying in our tea when she was eliminated last week, so her triumphant return was a pleasant surprise! Unfortunately, Diamond was not able to pull off Whitney’s insanely difficult vocals. The performance was outdated, the notes were flat, and Diamond was unable to hit the money notes. We’re sorry Diamond, but this was just not up to standard. OUR SCORE – 5 out of 10.

CeCe Frey – Mentored by Demi Lovato – Survivor’s Eye Of The Tiger – What happened to CeCe? Who should be blamed for her horrible performances? Is it you, Demi? This performance screamed off-Broadway musical. It was campy, glitzy, off pitch, nasal, strange, contrived, misaligned, mental and pointless. OUR SCORE – 4 out of 10.

Carly Rose Sonenclar – Mentored by Britney Spears – Bruno Mars’ I Wish It Would Rain – This was ridiculously good. In fact, it was so brilliant that for a split second we didn’t care about the other contestants. This is Carly’s competition to lose. There is a beautiful abnormality to Carly’s old soul voice that is not easily found in other musicians. Carly’s performance was by far the best of the entire season. We watched the performance roughly 30 times, and we’re still in awe. OUR SCORE – 10 out of 10.

Jason Brock – Mentored by L.A. Reid – R. Kelly’s I Believe I Can Fly – For some odd reason, Jason Brock stopped off at a Las Vegas 3 star lounge, and stayed there. His theatrical vocals didn’t bode well for the clichéd song, nor did his shockingly red outfit. It was slow, mundane, and blah. Jason has to find a song that would suit him; otherwise he will be left behind at the Las Vegas lounge forever. OUR SCORE – 6 out of 10.

Fifth Harmony (Formerly known as Lylas and 1432) – Mentored by Simon Cowell – Christina Perri’s A Thousand Years – The second best performance of the night belongs to Fifth Harmony. Their harmonies were chill inducing, their vocals were spectacular, and their maturity and simplification broke down all audience/musician boundaries. They allowed us into their lyrical journey and held us there, captivated by the sheer intensity of their pitch perfect vocals. If we could score them 11 out of 10, we would have done so. Give this girl group a slice of the cake and they’ll run with it to become superstars. This is the group to watch. OUR SCORE – 10 out of 10.

Who was your favourite? Who are you voting for? Remember to bookmark Celeb Dirty Laundry for X-Factor news, reviews, recaps, spoilers and polls. Check back here tonight for a live recap of the results show and a full review tomorrow of the elimination