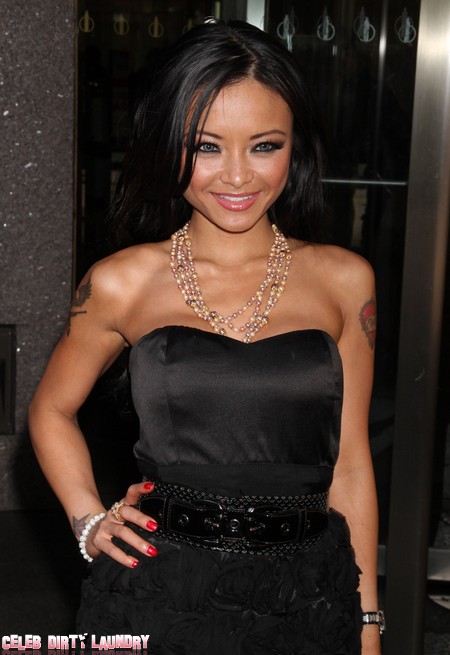 More drama for that pint sized hot mess Tila Tequila. The former reality star was rushed to the hospital last week after what appeared to be a suicide attempt. Reports are claiming that the 30-year-old almost died Wednesday after overdosing on undisclosed drugs following a brain aneurysm.

Emergency services were called to Tequila’s San Diego home at 1:30am on Wednesday and the star was rushed to St. Joseph’s hospital in Burbank, California. RadarOnline is reporting that Tequila suffered and aneurysm in the middle of the night, and according to RadarOnline, she irrationally took the contents of two bottles of prescription pills while overcome with excruciating pain. After receiving a strange text from her, Tequila’s roommate found her convulsing on her bed and called 911.

“Tila threw up all over her bed after overdosing and felt like she was dying. She was screaming for help, and in desperation, broke her bedroom window and attempted to jump out,” the source told RadarOnline.

Tequila, who was stabilized and kept in intensive care all last week, may have suffered permanent brain damage and is apparently still trying to regain her speech.

But there was more drama following her release from hospital yesterday as Tila’s roommate— who originally called 911— is telling TMZ that the MTV “A Shot at Love” star was actually trying to kill herself for a week before the event.

Last night, Tequila’s concerned manager called the police fearing something was off with the bisexual star and TMZ reports that when police arrived, Tequila refused to open the door explaining that she couldn’t because she was in a wheelchair. Cops eventually left her home content that Tequila was indeed resting and not a risk to herself.

Tequila has become notorious for her fame whoring ways, and seemed to be caught in a downward spiral since her Former fiancé Casey Johnson died in 2010 from complications to diabetes. Soon after Casey’s death, Tequila claimed to have suffered a miscarriage and went on a suicidal rant on Twitter. Stranger still, she claimed to be suffering from Dissociative Identity Disorder and that her alter ego Jane had taken over her Twitter account. She also lied about appearing on VH1’s Celebrity Rehab for a prescription drug addiction. Finally, in January of this year, Tequila appeared to be putting all the drama behind her when she was apparently cleaning up her act and studying to convert to Judaism, but this news proves that it was likely yet another attempt to extend her 15 minutes of fame.

Now that she has potentially suffered permanent damage, many are wondering if the reality star will be able to turn her life around, or if this is just the beginning of her final swan dive.