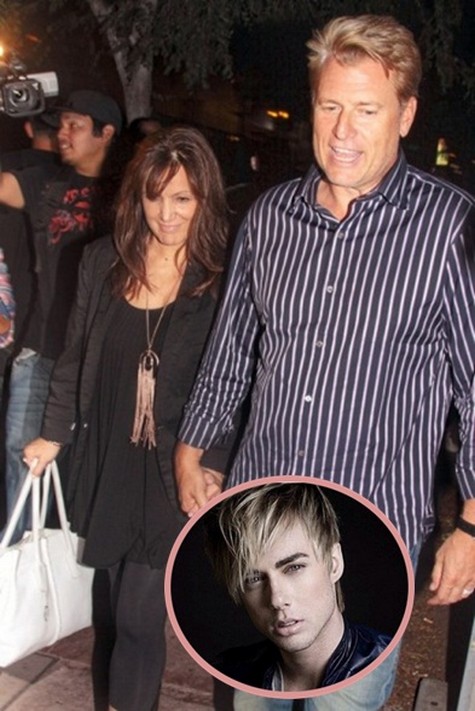 A gay rumor is the edict of being a celebrity.  I tend to ignore them for the most part, but when a rumor that a celebrity (or parent of a celebrity) is followed by a divorce filing, then something’s got to be going on.  After rumors were swirling across the internet that Papa Joe Simpson was “playing for the other team” on the down low, his wife, Tina Simpson shocked the world (including her daughters, Jessica & Ashley Simpson) by filing for divorce.  But how did this come to be?  A marriage over after 30+ years without as much as a public argument or at least a legal separation?  What happened?

Well, sources for Radar Online are reporting that Mrs. Simpson did in fact catch her hubby red handed.  In August, Tina supposedly found pictures of an up and coming model, Bryce Chandler Hill, 21, in her Los Angeles Home.  Finding pictures of a male model in your home is one thing, but seeing that the pictures were taken inside that home raises some serious questions.  How the hell was this kid able to have a modeling shoot in your home and why?

As reported by Radar Online: “Joe got busted after Tina found some modeling pictures of Bryce in her home.  They were taken in and around the house and she was suspicious because she didn’t have a clue who the boy was.  Joe and Tina’s marriage was in trouble and they had a make or break vacation booked in Hawaii, so she didn’t ask Joe any questions at this point.  However, when they returned to Los Angeles Joe bizarrely got on a plane to New York, just six hours after they had landed in California.  She thought it was suspicious, but she still didn’t suspect anything. Tina thought he was just going there for a business meeting”

Red flag!!!  If you are going on a vacation to get your marriage back on track, why are you are flying off to the other side of the U.S.?

Being the smart woman that she is, Tina had daughter Jessica Simpson’s best friend Cacee Cobb do some investigative work for her.  She had Cacee look for anything she could find on this Bryce character.  Of course Cacee didn’t come up empty handed.  She found more pictures of Bryce, but this time WITH Joe Simpson.

“Tina sent Joe, who was back in New York, a text message asking if he had anything to tell her. She quizzed him about Bryce but he denied knowing the kid,” the insider said.  This is where the drama really unfolds.  Dun, dun, dun!

Tina flew to New York for a surprise visit to Joe’s hotel.  Once she gets there she calls Joe down to the lobby and they go at it.  After making a drama scene in the hotel lobby Joe finally confessed to having an affair with Bryce and that he had also been staying with him in the hotel.  Tina Simpson did not ask for a divorce at this point…she demanded one!

Slow clap for you Mrs. Simpson.  You called your husband on his BS and you made him eat it.  Though I would have preferred it to be a huge scene caught on camera, having bits and pieces of the story come out a little at a time is just as savory.