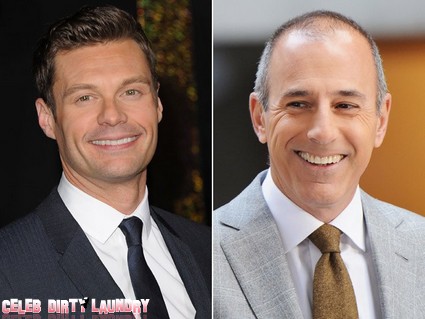 It’s funny how sometimes we don’t want something until we see who else might get it! That’s the case with US breakfast TV king Matt Lauer. He was ready to switch off the alarm clock and clear out his locker at the Today show. That is until Ryan Seacrest was named as his possible replacement. Now he’s not so sure…

According to TMZ …Matt is now considering staying on board if NBC virtually doubles his salary. He’ll re-sign if his rumored $17 million pay packet is upsized to the princely sum of $30 million. That’s right  – Matt Lauer reckons he’s the $30 million dollar man.

Only a few months ago he was so over the early mornings and the constraints of breakfast TV that he wanted out when his contract ended at the end of this year. He wanted to move on from Rockefeller Plaza for good. But now Matt is having a change of heart and it’s all because of one man – Ryan Seacrest. He doesn’t want the American Idol host sitting in his chair. To put it bluntly – he’s jealous!

Matt could very well score the whopping pay rise because he’s worth mega bucks to the network. Today is the highest earning show on NBC. It pulls in around $450 million a year. So an extra $13 million to keep the popular host would be a sound business decision. It leaves Matt in a great position to bargain!

As for Ryan – I’m sure he’ll find enough to keep himself busy between his radio show, Idol gig, charity work and new cable channel..