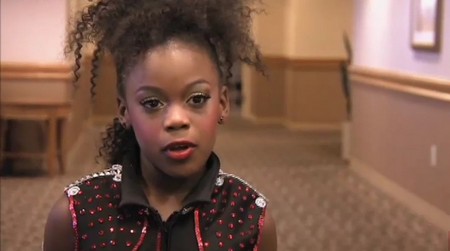 Michael Jackson has returned as a Toddler with a Tiara.  Toddlers and Tiaras has a “Thriller” on its hands with new moon walking sensation, Damitri’ana. Radar Online posted a new clip released by the controversial show of its upcoming episode featuring the pint-sized ‘Jammin’ entertainer jamon-ing and neck popping her way through her ‘Michael Jackson‘ routine. Take a quick sigh of relief. Mother Quiana left out the uber-iconic crotch grabbing from the dance number.

Naturally, Damitri’ana’s mother was all “Don’t Stop ‘til You Get Enough” girl and bursting with pride as she watched her eight-year-old daughter “Beat It” across the stage.

“Michael is in his grave, rolling, talking to himself, saying all-right Ana,” Quiana said about her “Smooth Criminal” daughter.

But “You Are Not Alone,” Quiana because, believe it or not, this routine didn’t make me want to “Scream”. Compared to some of those girls, Damitri’ana’s costume was downright demure and her face was free of the clown make-up those little ones think they need to look pretty. I’ll “Rock with you” anytime, Damitri’ana.

What do you think? Should the mother look at “The Man in the Mirror” and rethink the dance routine considering the source or is the King of Pop’s music and dancing just “Human Nature”?