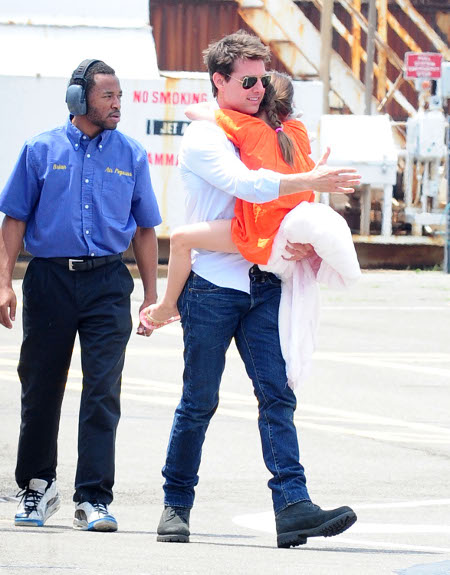 Tom Cruise might have severed his ties with Katie Holmes, but he isn’t going to let his daughter, Suri Cruise, get away from him anytime soon. Recently, Tom Cruise and Suri were photographed looking happy together in the happiest place on earth: Disney World in Orlando! As stated in the divorce settlement, the courts extended to Tom what is known as “meaningful and significant” contact with his daughter — and it looks like the couple got a chance to exercise some of that privilege.

According to TMZ, Tom and lil’ Suri — who is now virtually free from the shackles of Scientology — were spotted riding Aladdin’s magic carpets and dominating the jungle cruise ride in one of the most magical places (aside from the Church of Scientology of course *sigh*) on this earth.

While this little adventure was a special one, this isn’t the only outing Suri has taken with her father since the big divorce. Recently, just a couple weeks ago in fact, Suri and Tom were spotted helicoptering around New York City together achieving, what appeared to be, some quality father-daughter time.

While this divorce is devastating, mainly for Suri, I have a feeling — despite Tom’s cra-cra-crazy nature — that he will be a good father even in light of all that’s happened. I just hope that, during all this special time together, that Tom doesn’t try any spells/powerful Scientology tricks to try and suck lil’ Suri back into the practices. That was one of the dominating factors that caused Katie Holmes to leave Tom . . . if he wants to maintain a relationship with his daughter then he better leave all that business out of the picture. Ya hear me? To see the pic of Tom Cruise and Suri at Disney World click here.