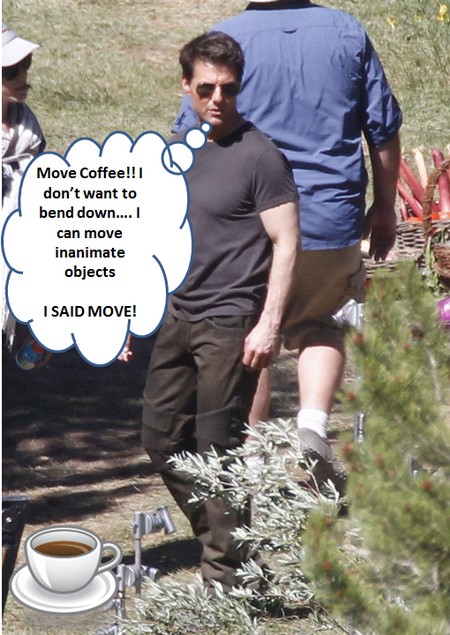 Tom Cruise has telekinetic powers. Wait, what? Let’s backtrack for a second.  An investigation by Rolling Stone magazine revealed in 2006 that Tom reached an advanced level of Scientology and was known as an “Operating Thetan” or an “OT”. The writer of the investigation, Janet Reitman, reveals that OT’s have “complete control over themselves and their environment”.  Okay.

The investigation continues, “OTs can allegedly move inanimate objects with their minds, leave their bodies at will and telepathically communicate with, and control the behaviour of, both animals and human beings. At the highest levels, they are allegedly liberated from the physical universe, to the point where they can psychically control what Scientologists call MEST: Matter, Energy, Space and Time.”  Listen, do you hear that? It’s Uri Geller crying in his kitchen. He’s asking for his spoons back.

Before you berate us for going all “Baby Alien Found in Closet” on you, these people are actually serious. Now pop open a bottle of chloroform and prepare your kidneys! Tom Cruise has allegedly reached a state of enlightenment, after practicing the “religion” for over 30 years. Not only does he sometimes resemble the Unabomber, but he has also traveled what is known as the “Bridge of Total Freedom“.
You can find this bridge in Elm Street, near Freddy Krueger’s house and Stalin’s old age home. Just search in Google Maps “Insanity and Naughty, Naughty Cults”

Tom surfaced today in June Lake, California where he is currently shooting his film, Oblivion. The cast and crew warmly greeted him and a brunette gave him a hug. Yes, we should always offer sympathy and empathy to our insane brethren. Never judge thy neighbor and all that hogwash.

Tom traveled in style in a Silver Screen bus, gifted to him by his Scientology cronies. The bus is fitted with drawers filled with thousands of slippers and before you think it’s for Tom to be comfy when he watches the dailies, it’s actually so people never walk in the vehicle with dirty shoes. David Miscavige (the head of the crazies) has to set foot in the bus first when it arrives and no-one else is allowed, except assistants.

Dear reader, please remember to close your mouth while you’re gasping from the Sandra Bullock type snorts of laughter you let out when you read this article.

Let us know in the comments below if your coffee mug moved when you read this article, you might just be a secret Scientologist…