Tom Cruise Caught With Mysterious Blonde In Sweden, Wife Hunt Back On 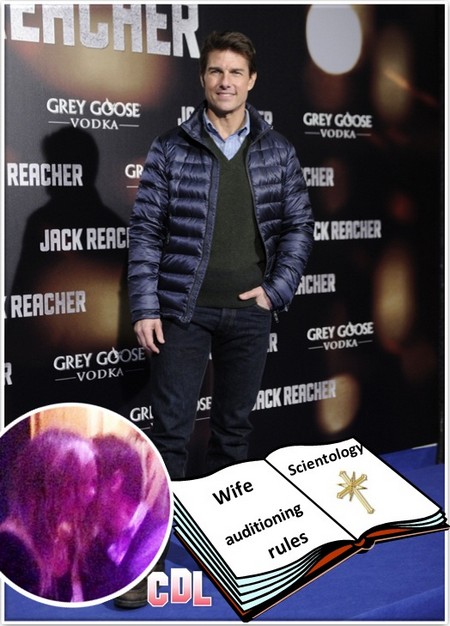 Since their shocking divorce over the summer, Katie Holmes and Tom Cruise have barely been in the same country—she’s raising Suri Cruise in NYC while he filmed in Europe. The Mission Impossible star doesn’t seem to mind the arrangement. He’s seen Suri, 6, a handful of times since the split and that works just fine for him!

We know from his previous relationships that Tom isn’t interested in his kids unless they’re brought up in scientology, so we expected him to cut the cord to Suri pretty quickly. Now, Tom is promoting his new movie Jack Reacher and left the premiere to hit up Rose Nightclub in Stockholm, Sweden, where he spent the night flirting with a mysterious blonde. Tom recently had his legal team attack a tabloid for criticizing his parenting style (absent, distant, uncaring), but he managed to kiss his troubles goodbye when he laid eyes on the sexy blonde.

Blurry photos show the two standing close together, talking. An eyewitness reports that Tom poured the woman champagne before inviting her to a VIP area. Tom arrived wearing his red carpet attire: a charcoal suit with a vest and checkered shirt. The photos show someone with the unmistakable jawbone of Tom while the woman leans in to hear him. An eyewitness says the actor singled her out immediately and stayed with her all night. He finally left alone around 3:00 am. His agent has a different story to tell, claiming the woman was a fan that Tom greeted, but we don’t believe it!

Tom is always super secretive about his wife auditioning process, and we think this woman may be on his list! I bet she got a fax the next morning asking for a head shot, bikini shot, resume, and list of affiliations.  Do you think we’re looking at Mrs. Cruise, or just a secretive fling?