Tom Cruise Decides To Give Up Scientology for Daughter Suri Cruise 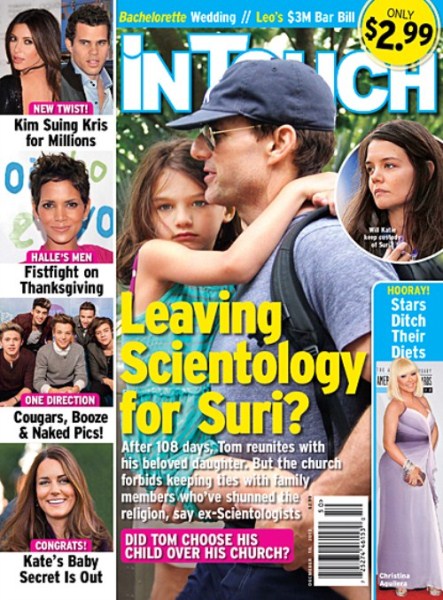 Could Tom Cruise finally be coming to his senses and doing what he feels is best rather than doing what the leaders of Scientology are demanding of him?  The actor has always been instructed to cut ties with anyone that the cult deems to be a non-believer, it’s just what they do. Running on that logic, he likely would have nothing to do with Katie Holmes now and that shunning could carry over to his daughter, Suri because technically Katie has custody.  The actor has been hit hard with criticism for saying Suri is the light of his life but then seeing her very sporadically since Katie filed for divorce.

According to the new issue of In Touch Weekly, that could all be about to change. Tom was recently reunited with Suri after a 108 day absence from his daughters’ life and those close to Tom think it may be a sign that he is breaking some rules.  Scientology doesn’t take kindly to half-hearted people. You’re either in or you’re out and if he was directed to shun Suri and broke that order, Tom could be in trouble with the church. It’s leaving many to question the unthinkable, that Tom might pick his child over Scientology.

Also in the latest issue you can catch up on the very latest about that violent brawl at Halle Berry’s home on Thanksgiving that left both Gabriel Aubry and Olivier Martinez busted up.  Halle and Gabriel have been entrenched in a long custody battle and this violent clash probably surprises no one close to those involved.

In Touch is also reporting that it’s finally baby time for Kate Middleton and Prince William. The secret is out and you’ll have to grab the latest issue to learn all of the juicy details!