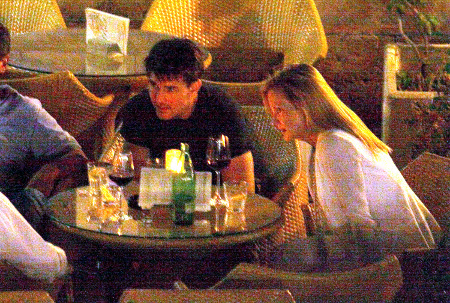 After Katie Holmes shocked the world earlier this summer by filing for divorce from super star, super short hubby Tom Cruise, it took less than a week for rumors to start circulating that Tom’s scientology buddies were already lining up possible wives for his next marriage.

I would be skeptical to believe this, if it weren’t for something pretty creepy and cultish: Nicole Kidman, Katie Holmes, and Mimi Rogers were all 33-years-old when their marriages ended with Tom. It’s like some misogynistic rule: Tom can age and shrink and fail at acting, so long as his legal female companion (oftimes referred to as “wife”) remains young, beautiful, and fertile.

Apparently Tom’s rep took a shot at Vanity Fair, who recently reminded us of the 2004 casting call that set up Katie with matrimony dictator Tom. “Lies in a different font are still lies — designed to sell magazines,” were his exact words. Well, let’s break this down.

1. Yes, you can change fonts but the letters remain the same, and so convey the same messages. 1 point to team Tom for that clever realization.

2. Many magazine stories are available online for free, and so don’t require any purchase. 1 point to team Everyone Else

3. The 33-year-old divorce thing can’t be coincidence. Twice is chance, thrice is habit. Tom seems to have some sort of obsession with young, impressionable women. 1 point to team Everyone Else

Now, we can play the semantics game and say that the “auditions” we’ve seen pictures from are actually privately hosted speed dating sessions. That’s a lot more romantic sounding. But the point remains: Tom is a single man, looking for love. I’m glad Katie got out and can keep Suri away from Tom’s crazy Scientology cohorts. I hope that his next wife won’t leave the marriage too damaged!