Tom Cruise Is Amazingly Professional On Oblivion Set, Even Though He Is a Crazy Person 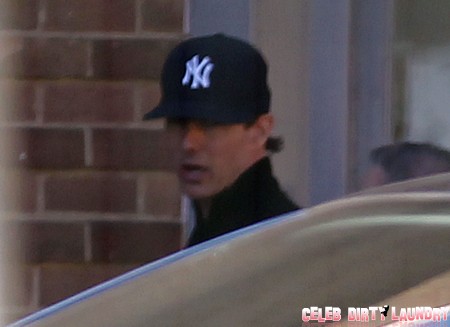 Tom Cruise is working on an upcoming film which is touted as a science fiction thriller – much like his own life – and according to reports; he is “amazing” on the Oblivion film set.

Cruise’s co-star, Olga Kurylenko, was impressed by his “boundless energy and positive attitude” on the set. She told E! News, “I was impressed… when he comes on set, he gives you so much energy, you don’t even need to drink coffee. He lights everyone up. He’s like a sparkle. He’s a very generous partner. He gives a lot. He’s very professional. He’s very nice, very polite to people.” We just threw up a little in our mouth… Laying it on this thick gives us the impression that Olga is actually dead and is speaking from a monitor, implanted into her brain by a Scientologist.

Cruise shot scenes for Oblivion in Iceland (the land of naughty volcanoes and Bjork) while he was busy with his divorce, because he wanted to “finish everything on time”. Ah, sweet, the maniac is a perfectionist! Who would have guessed?

The plot revolves around Cruise playing as Jack Harper, who is one of the last remaining men stationed on a future Earth who must save the planet from alien invasion. Olga plays his love interest in the pre-apocalyptic film. She hinted at E! News, “It’s going to be very romantic. It’s sci-fi, but there’s romance.” Ah, we’re glad to hear we’ll be treated to a romantic Cruise scene while the world ends in alien destruction!

Olga met little Suri Cruise when the little one visited the film set a while ago. Olga gushed, “She’s so sweet! She’s so adorable.” We presume Olga hasn’t met Tom’s BFF, David Miscavige? We doubt she’ll be gushing over him and saying he is sweet and adorable. Miscavige sucks out a baby kitten’s life force every morning, because it ensures him in staying immortal alongside Goldie Hawn.

Oblivion might be oblivious to the fact that the plot reeks of clichéd set pieces and Tom Cruise’s out of place intensity and mannerisms. The film is only being released in April of 2013, but we can easily predict that this one is going to hell quicker than a Justin Bieber fan being attacked by zombies at Lego-Land.

Let us know in the comments below what you think. Can Tom Cruise be “amazing”?