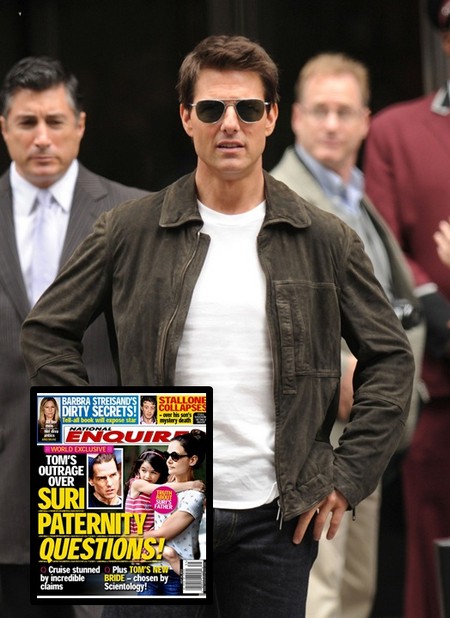 Tom Cruise is going insane over questions being raised about Suri Cruise’s paternity. The estranged husband of Katie Holmes is outraged and shocked over doubts being expressed that he is really Suri’s biological father. Stories have broken claiming that Katie was impregnated by L.Ron Hubbard‘s frozen sperm. L. Ron Hubbard was the sci-fi writer who dreamed up an easy way to make a million bucks and promptly founded Scientology. Author Andrew Morton elaborates on his theory in an unauthorized biography of Tom Cruise.

Another camp insists that Suri is the child of Katie’s ex, Chris Klein. Crushable explains the reasons: Not only because she (Katie) got pregnant so quickly after “breaking up” with Chris Klein, but also because the “Tom Cruise only has sex with men” rumors have also been running rampant for years.

If either story is true then Suri is not Tom’s flesh and blood daughter – and as the world speculates about this he is naturally becoming most perturbed! Not only has he lost his claims on Katie but he is threatened with losing those over his daughter. Naturally we have no way of knowing the truth about this issue. But we do know that the cover of this week’s edition of The National Enquirer promises to blow the lid off of Tom’s outrage over ‘Suri Paternity Questions.’

The Enquirer also promises to explain to us all about Tom’s new bride and how she will be chosen by Scientology. It is hard to believe that they haven’t yet thrown him out of the cult! I mean after all the savaging that Scientology has experienced since Katie filed for divorce you’d figure they’d kick Tom to the curb. At this point his continued involvement with Scientology ought to be considered a serious liability.

We also learn about Sylvester Stallone’s collapse after his son Sage Stallone’s death. The Enquirer offers ‘an in-depth look at the touching relationship the action icon had with his 36-year-old son, an actor, director, screen-writer and film preservationist, who made his movie debut with his superstar dad in 1990’s “Rocky V.”’

There is also a promise to uncover Barbara Streisand’s dirty secrets on this week’s cover. I’ll bet she is just thrilled.  She must be wondering what she did now.  Nobody in Hollywood wants to be on The Enquirer’s bad side.

Let’s see how much solid evidence The Enquirer can offer of Tom’s ‘outrage’ over the questions of Suri’s paternity. We’ll be reading the print edition soon.