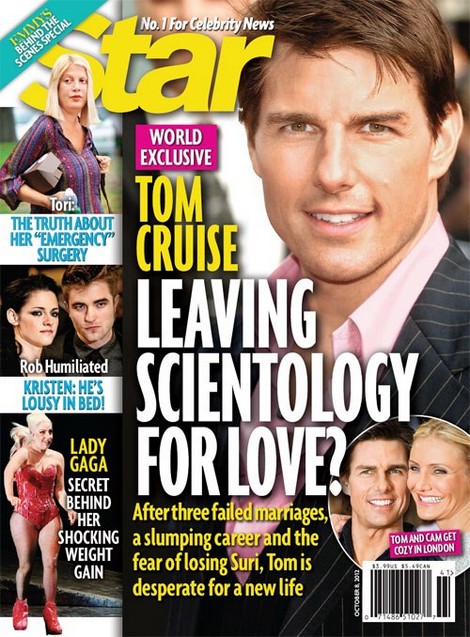 Could the biggest cash cow for the Church of Scientology be finally seeing the error of his ways? Tom Cruise has been a devoted, crazed Scientologist for over 20 years now but it seems that he may have taken the blinders off.

Sources are reporting that Cruise “hasn’t admitted that he’s definitely leaving Scientology for good,” an insider says of the new developments. “But he’s distanced himself from those in the church and has been hanging out with good friends who aren’t part of the religion.” Hasn’t Cruise always had friends that weren’t Scientologists? I mean Cruise was famously married to women that were both raised Catholic and he used to hang out with the Beckham’s for a while. It seems though we don’t know Cruise at all.

People are saying that since Cruise’s marriage to Nicole Kidman Kidman crumbled, then his relationship with ex-girlfriend Penelope Cruz went sour and most recently, the Katie Holmes divorce, Cruise has put things in perspective with his so called “religion” and maybe realizing it isn’t the best thing for him. “Tom’s been leaning on friends who have different perspectives, getting advice on moving on from Katie as well as on everything he’s been going through with Scientology,” the insider said. “He’s finally seeing that being such an advocate for Scientology hasn’t served him as well as he’d hoped — he’s gone through three divorces, and his public perception has sunk to an all-time low.”

So, will all this make Cruise give up his beloved Scientology and David Miscavige? If Cruise actually gets out I imagine there will be a lot of backlash from the church but I have been wrong way too much so we’ll just have to wait and see what happens.