Tom Cruise Is Too Small For Playboy Models 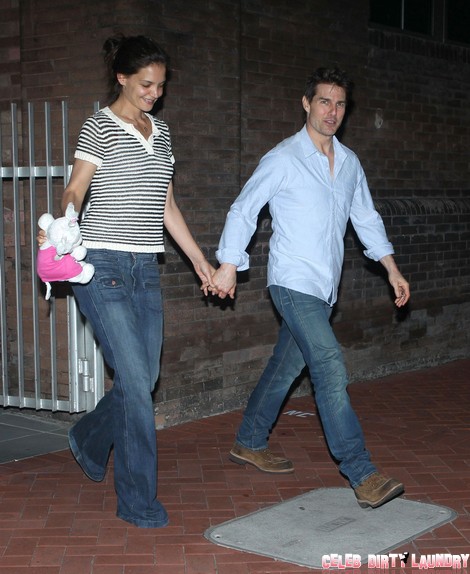 Oh, hi there! We didn’t see you! We were so busy laughing at the idea of a tiny Tom Cruise living in our sleeve that we didn’t even have a chance to acknowledge your presence. Good day dear reader, welcome to the land where Tom Cruise parties with Playboy models in London.

Tom was at Chinawhite on Thursday to see his DJ son Connor Cruise make his UK music debut. This is also the venue where Tom was seen chatting to twins Carla Howe and Melissa Howe, who once competed for a date with Ashley Cole. Tom banned alcohol from the DJ booth, not because Tom is a party pooping moron, but because alcohol is a no-go for a Scientologist (they would tell you otherwise, but never trust Scientologists or men smelling like insanity). Carla went and told The Sun, “Tom came over and just started chatting to us. He was really friendly.” Yes, Carla, he usually is friendly when he tries to recruit new members for his cult. A Scientologist comes –a – knockin’ at your door, so you run as quickly as possible and hide in the fridge. Never look back and never show any weakness!

Carla continues, “We’re good friends with Connor from LA, but we didn’t expect his dad to turn up – especially so soon after his divorce. He was having a great time and is still very good-looking.” Obviously the man will still be good looking! Have you not heard that he and David Miscavige suck the souls from newborn puppies in order to live longer than Goldie Hawn?

Carla hysterically quipped, “The only problem was he is quite small and we were both wearing heels, so we had to bend over to talk to him, but he was a really nice guy and doesn’t look anywhere near 50 – though no-one does in L.A.”

Tom allegedly left just before the end of Connor’s set, in order to avoid the onslaught of paparazzi. Tiny Scientologists don’t like photographers taking pictures of them, because a camera flash might just reveal Tom’s inner workings – endless cogs whirring about and ticking like a time bomb.

Let us know in the comments below how you feel about Tom Cruise getting his dance on with Playboy models.