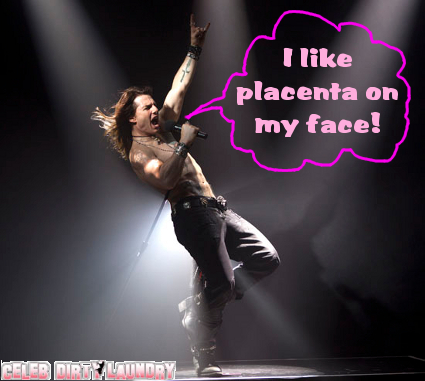 We’ve just uncovered another one of Tom Cruise‘s spells/potions, and it’s the secret behind his seemingly immortal, never aging, baby-like face. Would you like to know the special ingredient? If you said eye of newt and toe of frog, or wool of bat and tongue of dog, then you guessed wrong; however, if you said human placenta, then you were right on the money.

According to reports, the 49-year-old actor has sought out the services of a beautician to give him placenta-based facials. Just a little bit gross. Maybe? I don’t know, I’ll let you decide the gross factor on this one.

“Tom loves it because it keeps him looking young,” says a source.

Despite him turning 50 in July, Tom is adamant that he’s not going to let age slow him (or his career) down. He recently said: “I just did Rock of Ages and I felt good. I feel very lucky to still be doing this and to still be able to do it the way I want. I’m excited about turning 50 but it won’t change me.”

For those of you who don’t think Tom’s mystical methods are out-of-this-world and completely disgusting/crazy and would like to give them a try, I’ve done some research for y’all. You can buy your own magical bottle of placenta from PLAZAN COSMETICS for the price of $83. OMG, you think placenta comes cheap? [FYI, we do not know if that’s the brand Tom uses.]

While this does sound gross at first, we don’t want to rag on these type of products too much. To be fair, it’s not like they grab placenta, whirl it up in a blender, bottle it for consumers, and then lather it on people’s face. It is simply a mix of placental proteins  in a lotion-type medium.

It is apparently a new phenomenon in the cosmetic industry and many celebs, including Jennifer Lopez, employ similar treatments. How about you, would you smear some placenta on those lil’ cheeks of yours?