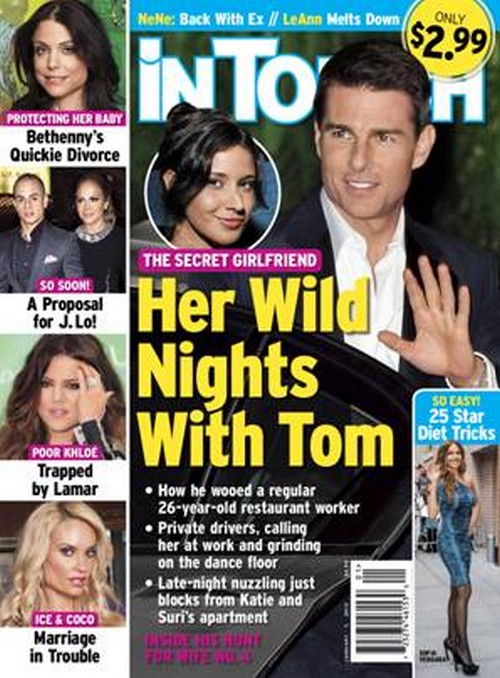 The current issue of IN TOUCH WEEKLY features the cover story “Tom’s secret girlfriend – Her Wild Nights With Tom.”  The magazine claims that they have all the details of how Tom Cruise wooed a 26-year-old restaurant worker, Cynthia Jorge.  Cynthia is a Queens, NY resident and she works as a manager in NYC Lower East Side at hotspot Beauty & Essex.

Cynthia was the one who made the first move, when Tom left her restaurant where he was having dinner with business associates, she handed him her card.  Her bold move paid off and it made an impression on Tom.  So much so  that he tried desperately to contact her.  The two finally hooked up and according to insiders for In Touch, “Less than 24 hours later, the duo — along with some friends — met up at Le Baron, where Cynthia huddled with Tom in a booth when he wasn’t pulling her out on the dance floor. “They did the salsa. He took her in his arms and spun her around the dance floor.  Tom looked like a pro.”

So it looks like the Tom Cat has a new candidate for wifey number four.  Tom is said to be besotted by the brunette beauty.  Insiders report, “He was mesmerized by Cynthia.”

Tom pulled out all the stops to make sure that Cynthia was captivated by him.  Tom, like Prince Charming, had a car waiting to take her home, after a night of partying, showing her just what she could expect as a girlfriend of a superstar.

To find out all the details of Tom’s hunt for wife number 4 and their steamy night out, pick up the current issue of In Touch on newsstands now.