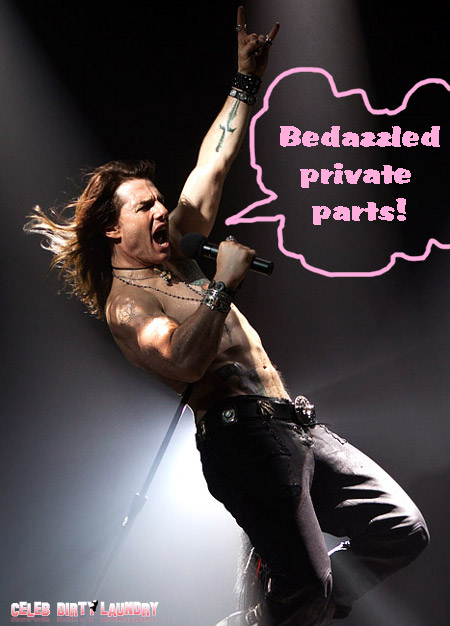 Tom Cruise plays rock star Stacee Jaxx in the upcoming film Rock of Ages, and in order to channel his inner rocker, naturally he donned a bedazzled codpiece . . . and it’s rockin’ Katie Holmes‘s world!  What is a codpiece you might ask?  It’s described as a “flap or pouch that attaches to the front of the crotch of men’s trousers and usually accentuates the genital area.”

Apparently it’s a pretty common costume item for rock stars . . . nonetheless, you will see Tom sporting one in the film, and when asked what he did with it afterwards, the actor said that he gave it to his wife of 5 years, Katie Holmes.  While Tom, 49, wears the dragon-shaped pouch throughout most of the film, he didn’t want to part ways with it.

He told E! News at the film’s premiere last Friday in L.A that he kept it and wears it.  Still?  This gives me weird mental pictures. He also said that Katie “laughed” when she saw the undergarment, which furthermore inspired him to hang on to the item as a memento.  As for the rest of his costume, Tom said that his daughter Suri was “quite taken aback” by his eyeliner and painted nails.  That’s pretty understandable!

There have already been whispers that this role for Tom could quite possibly be one of his best performances to date. Of playing Jaxx, Tom had this to say:

I don’t know about you lot, but I want to see it just for the pure pleasure of seeing Tom in a codpiece . . .