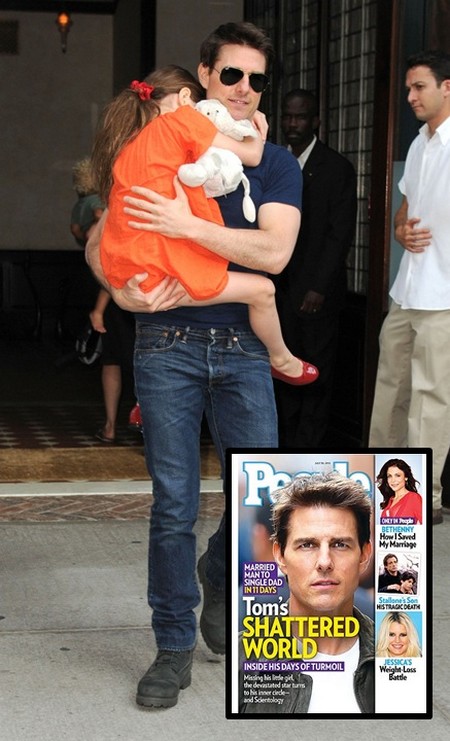 The current issue of People Magazine features the cover story ‘Inside Tom Cruise’s shattered World.’ The magazine has all the details on the private pain Tom Cruise felt when he went from happily married man, to single man in a scant 11 days.  Allegedly, Tom was totally blindsided when his wife Katie Holmes filed for divorce and primary custody of their 6-year-old-daughter Suri.

People magazine reports that when Katie filed he thought “was thinking, ‘What did I not see?’ “   Many have speculated that he was not that bothered by the divorce or the separation from Suri because he had not seen the child in a month.   It was widely rumored that Tom chose Scientology over Suri.   However, a source reveals, “He’s wanted to see her as fast as possible since this started,” a source, who cites Cruise’s obligation to his sci-fi thriller Oblivion as the main obstacle. “He couldn’t shut down production, cost people their jobs. People count on him.

After a month long separation Suri was back in daddy Tom’s arms yesterday morning as the actor flew in to New York to visit his daughter for the first time since Katie started divorce proceedings last month.  Tom just finished shooting his movie, Oblivion, in California and sources close to the actor have said getting back to Suri was his number one priority.

Meanwhile, his children Connor, 17, and Isabella, 19, are there for their Dad and have even flown in to his movie set to lend their support.

For much more on the Tom Cruise’s shattered world and the pain he is feeling, pick up the current issue of People Magazine for all the details on stands Friday!