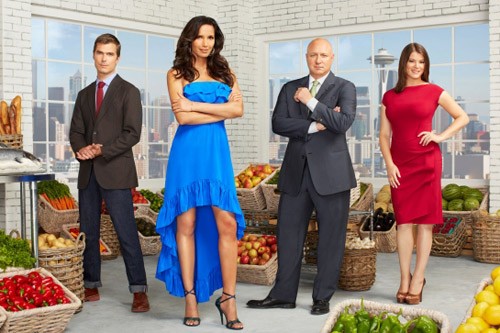 Tonight is an all new episode of TOP CHEF SEATTLE called “Foiled Again.”  “Top Chef” offers a fascinating window into the competitive, pressure-filled environment of world-class cookery and the restaurant business at the highest level. The series features aspiring chefs who compete for their shot at culinary stardom and the chance to earn the title of “Top Chef.”

On tonight’s seventh episode it’s the final 11 and the contestants are lamenting the loss of their fallen comrade. They are also decompressing from cooking the meal for Anna Farris and Chris Pratt and discussing their stress.  This week’s guest judge is previous Top Chef winner Stephanie Izard – the only woman so far!

Quickfire Challenge. They can cook anything they want and select anything from the pantry, but everything is covered in Reynolds Wrap. They can open the foil wrapped ingredients, but if they open it, they have to use it.

Reynolds Wrap will also be their cooking vessel for the night. Padma says top chefs and home cooks alike use aluminum foil to cook with. They’ve got 30 minutes for the immunity competition and they go to work.

Micah says all you can do is hope for the best. He got lamb and some other yummies. Kristen’s making a sponge cake, missing it up in a foil bowl. Danyele says she’s got balls. Sheldon gets scallops and wanted fish and doesn’t know how to cook them without a frying pan!

Danyele’s got bacon and white beans – yum! She’s also got a shallot and a tomatillo. She forms a pot out of her foil to cook with. Kristen’s tearing her cake into pieces to serve and isn’t certain how it’s turned out.

Danyele’s up first with a bean soup and a grilled tomatillo. Micah made grilled lamb and Padma remarks it looks rare. Stefan made German potato salad. John made beef egg drop soup. Brooke got onion and bacon that’s overwhelming her dish. Josh got chicken, potatoes and bacon – very nice. Kristen did almond and chocolate sponge cake with melted chocolate sauce and apples. Bart make beer poached cod and Stephanie said it was cooked beautifully. Sheldon made a shallot salad.

Padma asked Stephanie to pick her most and least favorites and she picked:

Elimination Challenge at Remlinger Farms Berry Festival. They’ll be doing head to head battles. The top six from the Quick Fire come to the front.

Kristen gets to cook alone but can win. The other five can select their partner. Here’s the lineup:

Sheldon vs. Micah, Danyele vs. Josh, Stefan vs. John, Josie vs. Lizzie, Bart vs. Brooke

The winner will get $10,000. The teams pull their cloches. There are gooseberries, strawberries, raspberries, blueberries – all berries.

Kristen says she has more time to focus on her dish with no competitor. Tayberries are her fruit. Stefan buys frozen tuna as John scoffs. At the chef apartment, John ribs him about the frozen tuna. Stefan says he’s going to sank him (jokingly.)

They get to the farm and all ready to go. They sprint to the outdoor kitchen which is crazy. There’s not enough room and Danyele’s aggravated already. A farmer pulls up with their fresh picked berries.

Lizzie wants to highlight the raspberries femininity and has paired it with pork. Josie’s making raspberry wasabi. A fight breaks out over blenders. Bart is furious.

John’s making gooseberry gazpacho, but he’s struggling. Micah’s putting strawberries into Ahi and it looks interesting. Josh is making a goat cheese mousse that looks yummy. Kristen has immunity but wants to win – she wants the cash to get back to her birthplace in South Korea.

Brooke wants to keep her streak going. Bart tells her he has just enough ingredients to whip her butt. She’s making tapioca and is pretty panicked.

Tom comes to visit the Top Chefs as they cook. John talks about his gazpacho – will he mention the frozen tuna? Yep, there it is. He said he’s cooking organic and Stefan bought frozen. Stefan calls him out for throwing him under the bus. Tom laughs it off. John’s excuse is that it’s not that it’s frozen, it’s that it’s not sustainable.

Micah talks about his daughters Sage and Saffron and says he misses them as he watches kids frolic on the farm. The chefs start serving the 150 people they must serve. John and Stefan continue to trash talk while they’re serving.

Judges will be Stephanie plus Gail Simmons from Food & Wine Magazine plus Tom. The chefs start introducing their dishes and they start sampling.

Danyele vs. John – They did blueberries. Tom says her tureen was crunchy. They like the spice on Josh’s blueberries, but that it lacks crunch while hers has too much.

Josie vs. Lizzie – Josie made a salmon and raspberry roll. Lizzie did pork with hers. The judges like Lizzie’s dish a lot. Josie’s left them lacking and her yacking was turning people off.

John vs. Stefan – John made gazpacho and Stefan did tuna with vinaigrette. They like Stefan’s but couldn’t taste the tuna heavily enough. John’s dishes seem less liked.

Brooke vs. Bart – Brooke made tapioca and Bart made a soup. Tom likes the soup but they didn’t care for the salmon. They liked the dessert.

Kristen vs. Kristen – She made custard that went over well with the judges and crowd alike.

John really won’t shut up about the frozen tuna and Stefan says his gazpacho was crap.  Stefan asks all the other chefs if they’ve ever used frozen tuna and tells John to suck him.

Padma comes in and asks for John, Josie, Bart, Micah and Danyele. She tells them they lost their head to head battles. Micah admitted Sheldon’s food popped. He said he liked his concept, but it didn’t come out when it came to the biscuits.

Gail asked if Josie was surprised and she said no. She said she could hear votes coming in to Lizzie’s station. They criticized her show she put on. She said she had to cover because she was behind on time.

They complimented Bart’s soup, but dissed his salmon. They asked if they thought the berries would work with the salmon. He said he chose wrong.

Danyele said in hindsight she said she would have made different choices. Tom said it was a good concept, but poor delivery. Padma said it was like eating lunch meat.

John said he thought he did well. They said the chorizo took over the gazpacho. He said he wasn’t going to make excuses, and then makes some.

They leave and send in the winners. Padma tells them they all won. Tom said they did the best job working with the berries.

Stephanie announces the winner as Kristen. They said her dish had no flaws. This makes back to back wins for her. Tom said the mousse was great. Padma tells her she gets the $10,000. Tom tells her to keep cooking like she has been. The losers applaud Kristen when the others come back in.

The judges start the elimination discussion. They say Micah barely used his berries. They criticize the lack of flavor clarity of Josie’s dish. Danyele’s dish was pronounced rubbery.

They call the bottom chefs back in for a verdict…

Padma sends Danyele packing. They tell her that her concept never came together. She said she tried something new and it didn’t work. The other chefs seem disappointed and encourage her to kick ass on Last Chance Kitchen to win her way back to them.

Stefan tells Josie to shut up and she gives him the finger. Stefan tells her she skated by one more time. She calls him a three year old and he tells her to move on.

Don’t forget to join us next week for another episode of Top Chef!

Disclosure:  I’m required to disclose a relationship between our site and Bravo. This could include the Bravo providing us w/content, product, access or other forms of payment.