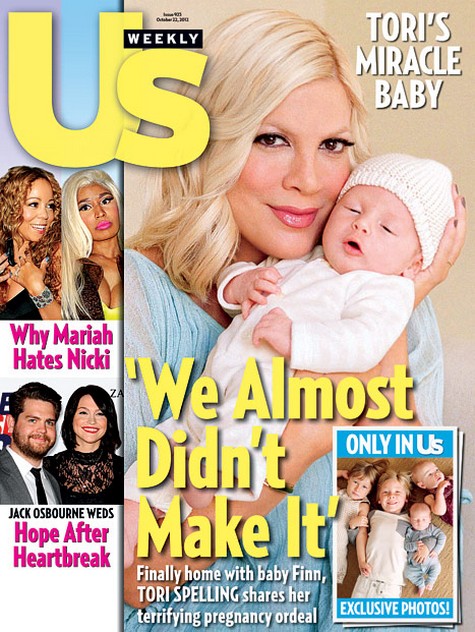 If you’re a woman of child bearing age you’ve probably at one time or another learned of the huge risk in delivering babies too close together via a c-section. This week Tori Spelling is sharing her own story after grabbing recent headlines due to her health crisis. The star opens up to Us Weekly in its cover story on news stands now, explaining just how much of a miracle it is that both she and 6 week old son, Finn survived the whole ordeal. The actress suffered from a condition called Placenta Previa and it was likely caused by getting pregnant just a month after delivering her daughter, Hattie.

Tori kept the situation private and is only speaking out now, telling of how she and Finn survived nine massive bleeds before he safely arrived on August 30th.  She also explains that her medical crisis three weeks after his birth was in fact her surgical scar rupturing. That required more surgery and a two week hospital stay. Tori  admits that she was terrified throughout the pregnancy saying, “I just remember thinking, I can’t leave three children behind,” Thankfully, everyone is now healthy and doing well. The families’ first photo shoot is on display in the latest issue and baby Finn looks peacefully unaware of all the drama he has already gone through.

Also in this issue is more on the unfolding American Idol fight between Mariah Carey and Nicki Minaj.  Nicki is said to have made a statement saying, “If I had a gun I’d shoot the b*tch” and that threat isn’t sitting well with Mariah or her entourage.  Producers absolutely knew that bringing these two divas together on the same judging panel was going to be a cluster. They both want to be queen bee and neither is going to back down, especially when a concession would ultimately mean handing control over to the other one. Will both Mariah and Nicki stay put and make it to the live shows early next year? You’re going to have to grab Us Weekly to read more!