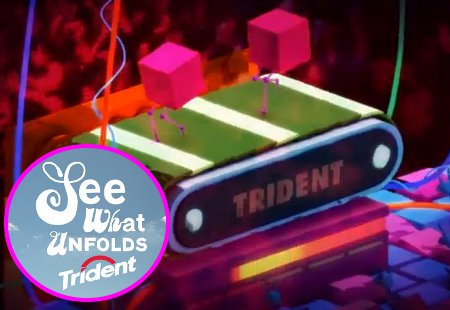 Trident recently invited fans to vote for their favorite viewer-created music video, all of which featured Duran Duran‘s song “Hungry Like the Wolf,” remixed by world class DJ Steve Aoki. The contest, part of Trident’s “See What Unfolds” campaign, received some really great videos and now, finally, the winners have been announced. Both of the winners’ videos — the jury selection and the fan selection — are wonderful, creative, and a pleasure to watch.

We’d like to send a big congratulations out to the Jury Winner San Charoenchai, who took home the grand prize of $10K with his stylistic and quirky animated music video. Seriously, I love his artistic style and think the surrealistic nature he integrated into the piece works extremely well with the sound of both Duran Duran and DJ Aoki. Murial Riquelme, whose video was the top voted amongst fans, took home the $5K prize. This video definitely has a fun-loving feel to it and I can see why fans ultimately voted for it as their #1 fave.

Jury Winner Mr. Charoenchai gave an exclusive interview after his win. We’ve been given permission to reproduce the interview in its entirety below, so give it a quick read and get to know a little bit more about this fantastic animator!

Please give us some brief background on your career.

After studying Communication Design and Computer Animation at FIT in New York City, I ended up working at a studio called UVPhactory. We worked on several interesting broadcast projects for clients like Syfy, ABC, VH1 and Versus. I was there for over 4 years, eventually becoming the lead 3D animator. In May 2012, I left New York to explore the West Coast industry with my wife (who is also an animator). I’m currently freelancing in Los Angeles, and working on an occasional Trident music video.

How long have you been in film making?

I’ve been working on little comics and short animations since I was a kid. My student thesis film ‘Big Shot’ was selected as a Regional Finalist for the 2007 Student Academy Awards. I suppose that was my first ‘real’ film. In 2011, I made ‘Frankie Rulez!!!’, a 5 minute animated short that was screened at a handful of festivals and picked up a couple awards. That was my first ‘real’ film where I kind of knew what I was doing. But, not really.

What attracted you to this project?

I loved the Trident: See What Unfolds TV campaign that was posted as a reference for the music video. It had all these weird and colorful 2D animated flourishes, so I assumed there was a certain preference for a concept that was bold, graphic, and animated. Myself being an animator and designer, I felt this was my strength, so it seemed like an opportunity I couldn’t pass up.

Where do you hope to take your film making?

I hope to continue directing short films and music videos, and eventually work on a feature length film. If one day I directed a feature length animated film that was on the level of Stanley Kubrick’s ‘Barry Lyndon’ I think I would die happy.

Be sure to check out the winning music videos below!