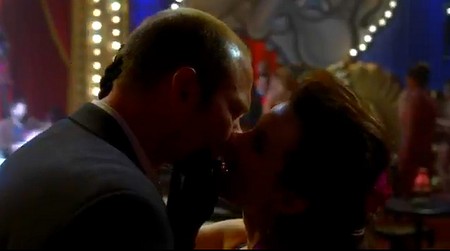 Tonight was the forth episode of season 5 of True Blood and we got to see a sort of Fairy Brothel/Strip Club portal.  We also got to meet many Fairies and we met Hadley, Sookie’s cousin again.  I cannot wait for next week, tonight’s episode was better than I expected! We have a sneak peek video and some spoilers to sink your gangs into for next week’s episode 5 “Let’s Boot and Rally.”

Big news for Iggy Pop fans – Best Coast’s Bethany Cosentino and Iggy Pop have teamed up to record a song for next week’s show.  Of the duet Iggy said: “I’ve always liked to bite. I guess this makes me a singing vampire, does this mean I have a licence to suck? Hi Bethany…”

On tonight’s episode Eric and Bill are sure the search for Russell was a suicide mission.  They both put their affairs in order – Eric released Pam and Bill tells Jessica she has done him proud.  The two continued their search trying to find out who let Russell out of the cement.  Sookie was really upset tonight and thinks she has ruined many people’s lives.  She gets so upset she gets drunk.  Alcide comes to visit and Sookie basically jumps his bones and they make out.  Meanwhile Bill and Eric happened to be looking into the window and saw the whole thing.  The episode was fangtastic and so much more happened.    If you missed tonight’s episode you can read our full and detailed recap here.

Spoiler alert: If you’re one of those people who doesn’t like spoilers, stop reading now! We have some juicy spoilers for you about the season 5 episode 5 of HBO’s “True Blood”.

Terry and Patrick are being threatened by Eric a fellow soldier, he demands to know if anyone followed them there.  On tonight’s episode they find Eric in a cellar. Patrick tells him he does not have to do anything to them.  In another scene we see Bill totally pissed at Eric.  He tells him, “He couldn’t keep his mouth shut, and now she is using Russell against them.”  Wonder who the she is?

Meanwhile we see a gloved hand opening a bag with Russell in it.  Next scene and a GREAT one, Sookie is with Bill and Eric and she says to them, “A 3,000 year old vampire wants to suck my blood, it must be Thursday!” LOL, there is a ton more in the video check it out below!

“Let’s Boot and Rally” airs on HBO on July 8th, 2012.   Check out the preview video and some pics below of episode 5 and let us know in the comments below what you think!