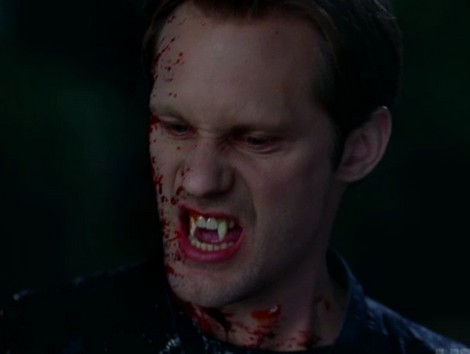 Tonight was the eleventh  episode of True Blood season 5 and WOW what an episode!  I cannot believe next week is the season finale and another season of True Blood will be over.  We have a sneak peek video and some spoilers to wet your appetite for next week’s finale –  episode 12 titled ‘Save Yourself !’

On tonight’s show a member of the military a general enters the Vampire Authority and he is not pleased not only does the military know that the vampires have been blowing up the True Blood factories but they have a video of Russell and Steve eviscerating 22 fraternity brothers at the local fraternity.  He lets the Vampire Authority know the Pentagon is already discussing ways to completely eradicate vampires from the face of this world.  The vamps don’t take his threats seriously but he tells them they have weapons, powerful weapons, that could wipe all the vampires out easily. They don’t stand a chance.

Jessica saved Jason’s life tonight and then tells him that Russell is after Sookie.  Jason headed over to the faery club to tell Sookie that she was in danger.  So much happened tonight you have to read our full and detailed recap here to find out tons more!

Spoiler alert: If you’re one of those people who doesn’t like spoilers, stop reading now! We have some juicy spoilers for you about the season 5 episode 12 FINALE of HBO’s “True Blood”.

Official HBO synopsis of next week’s episode: Eric is going to embark on a final, desperate mission to overthrow the Authority and save Bill from losing his humanity. Andy is going to face the consequences of a light pact he made. Alcide will get ready for a second showdown with JD. Sam and Luna are going to test their limits in trying to escape the Authority.

This week’s preview opens up with the faeries banding together and sending lots of faery light at Russell.  Russell is mocking them telling them he cannot even feel it!  Things are not looking good for Russell.  Meanwhile Salome tells Bill that vampires are doing to rule the Earth.  She seems confident! 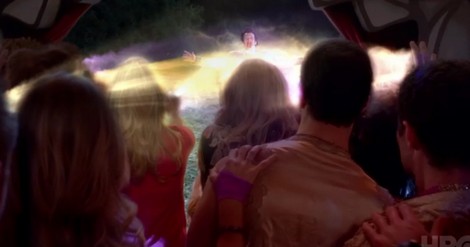 Meanwhile it looks like the military is ready to take care of the out of control vampires.  It looks like Jason is going to help the military get the vamps under control.  Jason is dressed up in some serious looking clothes and says, “The Time for Tolerance, is OVER!”   Further on in the preview Jason pops up again saying, “There is a war coming, it is us against them.”

Meanwhile it does not look like Bill has come to his senses.  He tells someone that his blood is beyond fear, beyond fear of retribution.  Eric tries to reason with him and tells him Lilith is a mad God, that she is nothing but destruction.  It looks like Bill is not listening.

Poor Sam NAKED has been caught by the Vampire Authority guards and Bill tells him he should never have come there.  Apparently Sam knows too much now. 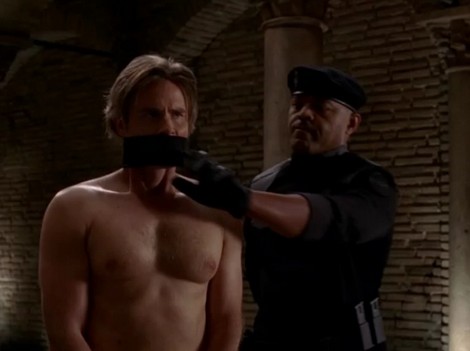 The preview ends off with the message, “WHO WILL BE SAVED!” I cannot wait until next week!  It looks like the season may end in a cliff hanger.  What do you think are you excited for the season finale?  Hit the comments and let us know your thoughts.

The season finale “Save Yourself” airs on HBO on August 26th, 2012.   Check out the preview video and some pics above of episode 12 and let us know in the comments below what you think!