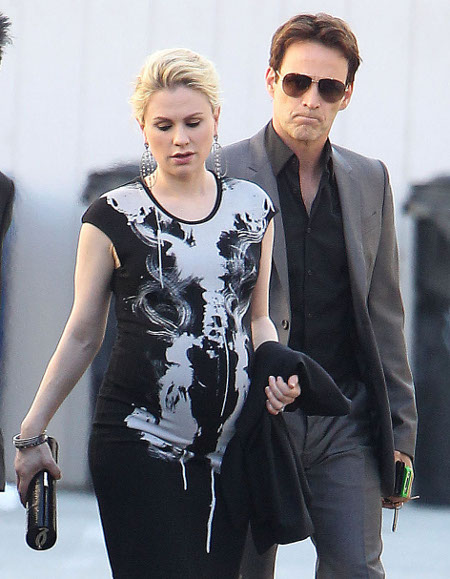 In the past, True Blood stars Anna Paquin and Stephen Moyer might have celebrated because they’re a part of one of the TV’s hottest paranormal shows. Well, after welcoming twins into the world, they now have something else to celebrate! The twins were born a few weeks early, but reps for the couple confirm that the twins are healthy and their parents couldn’t be happier.

“We can confirm that Anna Paquin and Stephen Moyer recently welcomed their twins into the world,” reps for the actors exclusively tell People Magazine. “The babies were born a few weeks early, but are in good health and both Mom and Dad are overjoyed.” These are the first children the couple has had together. However, Stephen has two children from other relationships. Anna Paquin is 30 and Stephen Moyer is 42.

This is wonderful news for the couple, but do these new additions mean that they’ll be stepping away from True Blood? Probably not, which is a good thing, right? The couple just wrapped up their epic fifth season of TrueB and both stars will definitely be back next season for some more supernatural action. How could they not be?

As we saw at the end of last season, Bill drank the blood of Lillith, turned into a super baddie vampire, and Sookie still has to deal with that vampire who she’s been sworn away to. *Sigh* While things never seem to stay happy-happy-happy in Bon Temps for long, at least Anna and Stephen can have a little joy off set with their new lil’ baby nuggets. Congratulations!