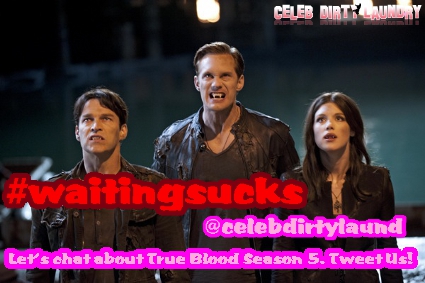 True Blood! That’s all our lil’ supernatural-drama-loving minds can think about lately. The season five premiere is going to be here faster than Sookie can shoot magical freakin’ fairy light from her fingertips and we are, needless to say, getting excited. There are lots of goodies  circulating now that the June 10th premiere is approaching, including some FANGtastic spoilers regarding the first episode of the season.

If you’re at all sensitive to borderline-revealing spoilers, then I urge you to stop reading now. However, if you’re any sane, reasonable Truebie the desire to continue will, I’m sure, be too great for you to simply turn back now.

According to TV Line, the first episode of the season will feature Sookie and Lafayette desperately trying to deal with the aftermath of Tara’s shooting. Now, Tara got shot really bad at the end of the fourth season and it’s going to be very disheartening if the show revives her with vampire blood. Sometimes, even in the supernatural world, there needs to be consequences — especially for the main characters.

We know miracles exist in the magical land of Bon Temps, but let’s be real . . . we like miracles that are grounded in reason and not ones that will influence the show in outrageously positive ways. As far as I’m concerned, Tara’s character has hit a wall. Her story is done; I don’t need any more of her whininess. However, to play Devil’s advocate, it might be interesting to see her step into the role of a vampire — the “deadly” creature she’s vehemently despised her entire life. They could definitely evolve her character in that way; but just to ressurrect her for the sake of bringing her back, just so our dear sweet Sookie still has her BFF . . . well, we don’t need that to happen, do we?

Tara’s blood wasn’t the only blood spilled at the end of last season. Bill and Eric got themselves into a bit of a predicament as well, and we will see them having to clean up their own mess — Nan’s murder.

While Bill and Eric are cleaning up this disaster, a vampire death is never a pretty (or clean) one, they will get a visit from a member of the Vamp Authority, a woman who goes by the name of Nora — who is inexplicably linked to Mr. Northman’s past. Interesting. A new love interest for Eric?

Furthermore, Jessica (the red-headed vampire) enjoys her freedom while Bill is away and gets into some hardcore college partying; the newly-turned vamp Steve Newlin (he was that annoying Fellowship of the Sun preacher) will start harassing Jason; and Terry’s PSTD will resurface after his war-friend Patrick — who I believe to be some supernatural force — stirs up unwanted memories.

Most of this stuff we pieced together from the newest trailers, but it provides some confirmation as to exactly darknesses we can expect  to encounter on June 10th.

On a different note, actress Tina Majorino (Veronica Mars, Bones) has gotten a recurring role on the show as a key member in the Vampire League. We won’t see her until the third episode, but we know she’ll play a somewhat key and vital part in the secretive vampire organization.

So there you have it! A few nuggets of info to satiate that incredible appetite for all things True Blood. Don’t forget to tune in on June 10th for another Epic HBO premiere. We’ll be there. Will you watch alongside us? In the meantime, chat with us about True Blood on Twitter. #WaitingSucks . . . but @celebdirtylaund is always right there with y’all.