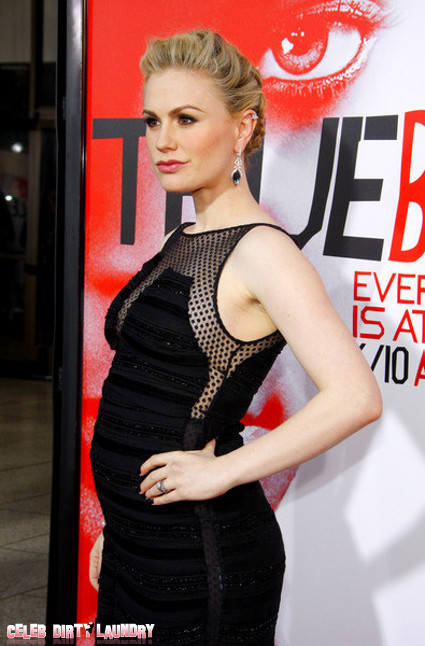 True Blood‘s Anna Paquin and her character Sookie Stackhouse are both bulging with a growing baby bump, but according to the show’s creator, Alan Ball, only one of them will be giving birth in the near future . . . and it’s not going to be Sookie. So if y’all were expecting to see our favorite lil’ human-fairy birth another lil’ human-fairy, well, then I hate to disappoint you but it’s not going to happen.

For those who haven’t heard (or seen recent pics), Anna Paquin and hubby Stephen Moyer are expecting their first child together. This is over-the-top exciting news for the couple, but unfortunately this impending birth just doesn’t fit into Sookie’s story. No worries, though, Truebies. Alan Ball isn’t planning on firing the actress just because she has another human being growing inside her — he says they will employ industry-old techniques to hide Paquin’s baby bump.

Like, for example, giving Sookie extremely large purses to hold in front of her belly! Subtle, right? I’m sorry, but this requires an LOL.

“So, in the last few episodes, Sookie’s holding a big purse in front of her at all times,” Alan told Access Hollywood at the season 5 premiere in LA the other day. “I actually heard from the costume designer about midway through the season, she went, ‘Sookie can’t wear a Merlotte’s T-shirt anymore.’ And I went, ‘Well, it’s a good thing Sookie isn’t really at Merlotte’s anymore, she’s basically trying to save the world.’ So, we’ll put her in loose-fitting, save-the-world outfits.”

How great is that? What exactly is a save-the-world outfit? I guess we’ll have to see, and I wonder if Alan realized that he was unveiling a borderline-delicious SPOILER? Now we know that Sookie is going to have an extremely tough, potentially consequential, fight on her hands in the upcoming season.

I’m emotionally preparing myself for several antagonists this season, including but not limited to, Russell Edgington, The Vampire Authority, Steve Newlin, a potentially nasty pack of disgruntled werewolves, Patrick (Terry’s war-vet buddy), and who knows what else or who else. That’s one thing True Blood is so good at doing: weaving several villains, each of who has a clear and distinct motive, into the lives of our fave Bon Temps peeps.

Any FANGtastic news worth sucking up we’ve got for you in our TRUE BLOOD section. Check it out and DO NOT forget to tune into the season 5 premiere, which airs on HBO on June 10th. MAKE IT, or STAKE IT.