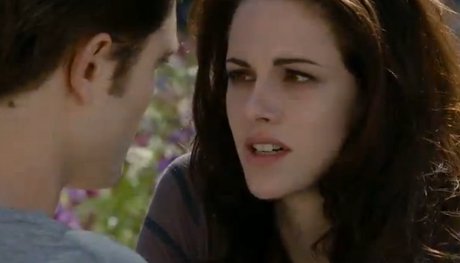 There’s only one thing in the world that might be scarier than Amanda Bynes behind the wheel: A group of screaming Twihards as they prepare themselves for Twilight: Breaking Dawn – Part 2, the final installment in the franchise that’s brought us the immortal romance of Bella Swan (Kristen Stewart) and Edward Cullen (Robert Pattinson). While there are bound to be tears in theaters all across the country, fans of the franchise will have much to celebrate as they witness pop culture’s most influential vampire couple ride off into a glorious, breaking dawn.

In a special TV Spot promo clip provided to us by our pals over at Celebuzz, Bella and Edward contemplate their relationship — which, as we know, has been filled with moments of doubt, of skepticism, of fear, of hilarity, of let’s-try-not-to-break-the-entire-bedroom sex, and of course plenty of OMG-filled adventure. In the exclusive, Edward confesses that being around Bella — and the innumerable odds she’s overcome over the years — has forced him to question the true nature of an obstacle . . . because whatever is thrown in her path, she just seems to leap right over it.

How dare you think the swooning and gushing ends there! Bella, like all sensible vampire brides, reciprocates his feelings. “Nobody’s ever loved anybody as much as I’ve loved you,” she says.

The brief 30-second video is filled with enough Edward and Bella action to satiate that incredible vampire hunger of yours for at least a few hours. Don’t forget to leave us your thoughts in the comments section below and, also, let us know what you’re most excited about as you prepare to witness the final installment in this epic tale of forbidden love. The Twilight Saga: Breaking Dawn – Part 2 premieres November 16th in all theaters. Better go get your midnight premiere tickets now!