Two and a Half Men Season 9 Episode 16 ‘Sips, Sonnets and Sodomy’ Spoilers (Video)

BY Rosie Leblanc on February 13, 2012 | Comments: one comment
Related : Preview, Television, Two and a Half Men 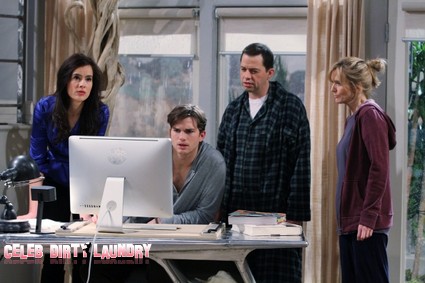 Tonight, Two and Half Men is back with an all new episode titled, “Sips, Sonnets and Sodomy” that will be full of surprises, I’ve no doubt you will enjoy it!

What happens tonight? Well, get ready for a Valentine massacre when a storm keeps Walden (Ashton Kutcher). Alan (Jon Cryer), Lyndsey (Courtney Thorne-Smith) and Zoey (Sophie Winkleman) trapped in the beach house on Valentines Day and nobody can leave. When your girlfriends hate each other – there can’t be anything good about the situation. Relationships will be strained and put to the ultimate test when conflict brews, we might even see a cat fight between the women before the storm is over.

Last week Walden tried to get Zoey to relax by introducing her to Berta’s “enhanced” brownies, but they really didn’t work, what will he do this time to get her to relax when she and everyone else will be so stressed out about being trapped together?

Official synopsis: Tempers flare when Walden, Alan, Lyndsey and Zoey are trapped in the house during a storm for a sequestration that might result in another Valentine’s Day massacre.

I’m just wondering how much more Zoey can take of this relationship with Walden, will tonight be the final straw? She was first fed up with how immature Walden was and then she was bored with their sex life, will his new found relationship with her daughter be enough to sustain the already troubled relationship? Make sure you catch our full official weekly recap to get all the details!