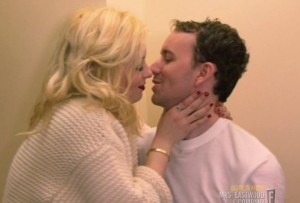 Did you all know that celebrity photographer Tyler Shields’ girlfriend is Clint Eastwood’s daughter Francesca Eastwood? Yeah, me neither. After watching last night’s episode of Mrs Eastwood & Company, we got to see the 19-year-old blonde interact with her famed photog boyfriend and while there is a big age difference (Shields is 30), the couple looks good together.

Francesca was set to attend Shields’ gallery opening but not before her boyfriend decided to take a series of photos of his woman. And while we all know that Tyler likes to do daring and unique photo shoots, he doesn’t make any exceptions for his girlfriend either, making his craft seem to be the priority.

He told Francesca he wanted her to stand on the balustrade of a bridge to photograph her and she was beyond scared telling him, “You don’t value my life.” Despite being scared to death, Francesca went stepped up onto the edge but not without throwing in a jab, “When we’re shooting, you don’t give a f***. You don’t care if I’m having a panic attack.”

But Tyler didn’t console her by any means saying, “That’s the way that it has to be.” After he got his shots (and she survived) he was then apologetic saying, “I’m sorry that you got scared on the bridge baby”, while Francesca was quick to say, “In the future I know I just need to say “I can’t do this shoot.”’

We do not yet have the official photos from Shields’ photo shoot of his girlfriend, but we were able to catch some screen caps of the couple’s interactions on last night’s show. Check them out below.