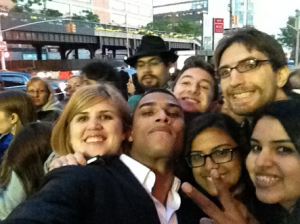 Tyra Banks with a MUCH younger guy? You don’t say. According to Radaronline.com, Tyra Banks’ new boyfriend is 24-year old Robert Evans, a hunky hottie from Britain who is set to be a judge on the upcoming America’s Next Top Model.

Apparently Tyra threw out her longtime cast of Miss Jay and Nigel Barker for the boxer-turned-model and now she’s sinking her cougar claws right into the kid. Nothing like mixing business with pleasure!

According to the website, the couple were spotted at the Palihouse in Los Angeles last week drinking dirty martinis and canoodling. And get this, after Evans paid the bill (yes, he dished out the dough) Tyra slipped out to his hotel room. “He put his arm around her as they walked to the elevator,” an eyewitness said.

If THAT date wasn’t enough, just a couple days later the duo were spotted hanging out at Pelican Hill in Newport Beach as they got cozy at a champagne brunch. The source added, “They were holding hands on the table and gazing into each other’s eyes. You could taste the chemistry between these two!”

For more on model Robert Evans, check out his model profile here.

I’m assuming that relationship with rapper Drake didn’t pan out too well for Miss Tyra? Oh well. You win some, you lose some.

Here’s just hoping that Tyra keeps her pocketbook on lock. Cubs can be money-honey famewhores too!

Ahhh. Don’t they look so cute together? I’m waiting for the statement that says “oh, we were just having a couple of drinks, getting to know each other after a long day of on set training”. Eye roll. 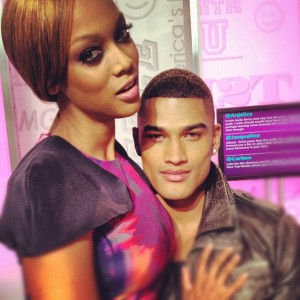