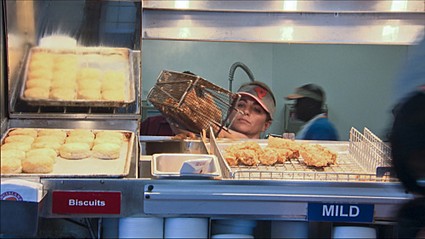 A whole new episode of the two-time Emmy Award-nominated reality series Undercover Boss returns for its sixth episode tonight called “Popeyes Louisiana Kitchen.”  Stay tuned as we live blog the episode with all the up-to-the-minute details. On last week’s episode called “American Seafoods” Bernt Bodal, the CEO of American Seafoods must sink or swim when he tackles the dangerous work of a deckhand on a fishing vessel off the coast of Alaska, among other jobs Bernt Bodal wants to go undercover to find ways to increase efficiency and make the company more profitable.  If you missed the episode you can catch our official recap here!

On tonight’s show Lynne Zappone, Chief Talent Officer of Popeyes Louisiana Kitchen, the world’s second-largest fried chicken restaurant chain, is frustrated with an employee’s lack of Southern charm behind the counter. Also, the Boss is brought to tears by another employee’s generosity.

Lynne said about the experience: “She’d never experienced anything quite so exhausting, and yet ultimately as satisfying, as going behind the counter at Popeyes. “It made me feel like I am old…and slow,” she laughed. “But it was a wonderful opportunity to understand the employee experience, and to get a sense of the great people working for us–they have such passion for the brand.”

RECAP: Born in Rhode Island, Lynne Zappone is from a huge Italian family, she has a daughter that 15 years old, divorced for 11. Working as Chief Talent Officer, she has been with the company for about five months now and because she is so new, she is the perfect person to go undercover.

Her fist job is kitchen prep, she arrives at the Louisiana store to meet with Aaron. She starts to flour, batter, flour the chicken. They start to chat and he tells her that he has seen corporate clowns and would prefer if they would find out what the employees think. Aaron tells Lynne that she needs to hustle, she’s moving too slow and the store has opened. Aaron starts to scream across the room at another employee and Lynn thinks it is very disrespectful in front of the customers.

Lynne heads to New Orleans and meets Gina, who has been with the company for 27 years. Gina tries to show Lynn the ropes at the cash when the Manager comes along and reminds her to wash her hands. She then goes to drop a stack of cups and Gina tells her to throw them away. Gina takes her in the bathroom and she tells Lynne there is a bad smell because a pipe is broken and nobody has come to fix it. The two take a break and Gina tells Lynne that before the hurricane, her life was almost perfect. She goes on to tell her that she had to go away for a few months to live after the storm and Popeyes fired her.

Lynne’s next stop is at her third job, food packing. She trains with Josh, who she finds is very genuine – he invites her to Taco Bell because Popeyes is too expensive and they don’t have a food program for employees. As they eat lunch, he tells her that he walks to work and back each day, an hour each time. They return to the restaurant and they are still talking, he tells her he was homeless and is working to go back to school and get a car. She asked if his family supports him and he said no because of his sexual preference. What he’s lacking from his family, he gets from his co-workers, they are a great team.

Lynne is now in Mississippi, she will be working in the janitorial department, she meets Douglas. He has a lot of pride in his job and the company. Lynne cleans the garbage cans, Douglas tells her that the Board of Health came by and he got 98%. He then showed her a watch that he got for being “Employee of the Month”, but Popeye’s doesn’t do it any more. Douglas shows her that he buys this special oil soap that doesn’t hurt children because the company won’t buy it. He goes on to tell her that he lost everything in Katrina and he thankfully met a Pastor that took care of him. He works for his church, he is the cook and his goal in life is to have a soup kitchen. Douglas invites Lynne to the church and she goes with him to help serve meals to the community.

It’s time for Lynne to tell everyone the truth that she has been undercover all week. She meets with Aaron first and tells him that she is one of the corporate clowns. She goes on to tell him that he is disrespectful but she knows that he is a really smart guy and she is going to set him up with a mentor at Popeyes.

Doug is next, she goes on to tell him that she is going provide all the restaurants with some less harmful products. she is also putting into place an employee recognition program. They are going to help him with his church by giving them $10,000.00 in his name to help out.

It’s time for Josh, she tells him that the employee discount is going to be renewed in the company. She is also giving him a $20,000.00 trust fund for school to get his hospitality licence. Another gift, $10,000.00 to help him buy a car or to help with living expenses.

The last person is Gina and Lynne tells her that she is not forgotten. Lynne is going to get the pipe in the bathroom fixed and all restaurants will have the proper cleaning supplies. She is arranging a family reunion for her in New Orleans. They are also setting up an employee relief fund and start with someone who is really deserving, that is her. They are giving her $10,000.00 to help get her life back on track.

In the week’s since, Josh bought a new car that helps him get to his college classes on time. Doug’s church is helping the community even more because of their donation, Gina bought herself a new car and can’t wait to go to her family reunion while Aaron ended up with a mentor and nothing else. Sucks to be disrespectful, doesn’t it?