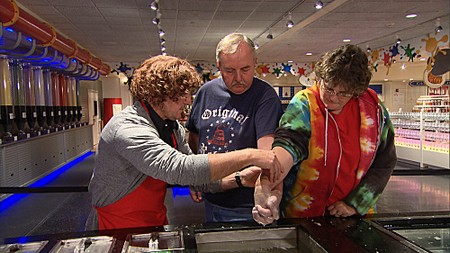 A whole new episode of the two-time Emmy Award-nominated reality series Undercover Boss returns for its eight episode tonight called “Yankee Candle.”  Stay tuned as we live blog the episode with all the up-to-the-minute details.

On last week’s episode called “Oriental Trading Company” we met the CEO AM Taylor. Taylor was concerned when he discovered some of his employees aren’t happy.  If you missed the show you can read a recap here!

RECAP: Harlan Kent lived a privileged life, he has been CEO for two years of Yankee Candle and is ready to leave his wife and three kids to go undercover. He will be posing as Dan Johnson, who is looking for a second chance at a new job.

Today he is in Massachusetts, their flag ship store to meet with Blaze. The first job is to make candles, his fist clients are really nice and Blaze tells him not to expect that with everyone and gives Harlen a taste of what some bad kids would do, dip the candles in all the different color of waxes and mix them up. He goes on to tell Harlan that sometimes he feels like slapping kids or punching an eight year old. Blaze goes on to show Harlan how to make a cast of his hand, Harlan found the whole experience really cool. Blaze is suspicious, he thinks Blaze is too good at the making the casts. Harlan takes a break with Blaze and while they are chatting, Blaze asks him if he has done this before because Harlan feels familiar to him. Blaze goes on to speak to another employee and actually guesses that Harlan is from the Undercover Boss show. Harlan confronts Blaze, he tells him that undercover he hears a lot more that is going on and wants to to talk to him in private more about it.

Harlan is now off to his plant in Massachusetts and he will be working on the line with Jose. Harlan is really impressed with Jose, he’s all about quality and tells Harlan he can pack seven to eight candles a day. Harlan is having a hard time, he finds it really tricky and can’t keep focused. Jose jumps up to help him right away, they start talking and Jose tells him what he doesn’t like about the company is that it takes a kiss ass to move up and he doesn’t think it is fair. He goes on to tell Harlan that his father was a heroin addict and watched him die, his mother was a drug dealer and he was raised in the streets. Jose thinks struggles make you strong in life, he is into martial arts and just opened a new studio, he invites Harlan over. Harlan heads over to the studio and is surprised to see that it’s not fancy, but Jose is just happy being able to show kids how to do martial arts. It looks like a bare warehouse, there are mats on the floor for the kids to work out on, Jose explains that they had a fund raiser to pay for them.

Harlan is in George, he meets Megan. This store is doing too well and Harlan wants to see why. Megan tells Harlan that someone from corporate was at the store the other day and she tried to tell them that the store is not in good condition and they wouldn’t listen to her. Harlan is making the store ready, vacuuming, cleaning the bathrooms and dusting. Harlan and Megan take a walk, she tells him that she and her husband own a tattoo shop and it wasn’t doing too well, also she is epileptic and can’t drive herself any more. They continue walking and giving out candles to people to encourage them to come into the store.

Harlan is off to a Pennsylvania store, he meets with Dan and they are going to set up a new store display. Dan gives Harlan a half hour to set up the display, but falls behind. Dan explains to Harlan that lots of times they don’t have the right stuff to set up the displays. Harlan watches Dan at the cash, he’s a little quirky but does well. They head out to have microwaved sandwiches for lunch. Dan tells Harlan that his dad past away last year from kidney failure, so now his mom needs him. He also has a lot responsibility taking care of his mom and his sister and tells Harlan he can only hope to be like his dad because he was a great dad.

All the employees have been called to the flagship store to meet with Harlan, the CEO. He meets with Blaze first and tells him that what he told him was completely inappropriate, Blaze tells him that it is just a pay cheque. He goes on to tell Harlan that he had a tough life with an alcoholic father, Harlan is concerned that he might not have a role model and when Blaze tells him no, Harlan offers to be his role model to make him excited to go to work.

Next he meets with Jose and tells him that he is impressed. Harlan tells Jose that he was really concerned about the “kiss asses” being the ones to get promoted. He wants Jose to lead a team because he is so positive. Harlan is also giving him $5,000 for him to use anyway he wants and $10,000 to his gym.

Megan is next, Jose loves her passion about the store. He promises to renovate the store and he is also giving her and her family an all expensed trip. Lastly, he would like to use some of his connections to help her with her epilepsy. He is going to provide her with $20,000 for medical expenses, he tells her that she is a good person.

Dan is last, Harlan says he heard really clearly that the passing of his father was really tough. Harlan is giving him $15,000 to help take care of his family. He is also giving him $10,000 to reduce his student loans.

Harlan goes fishing with his dad and thanks him for everything he has done for him, his father tells him that he and his mother are as proud as can be with him.

After the show, Blaze continued his education in business, Jose’s gym is so successful he is looking into a larger place, Dan paid off his mother’s bills and Megan had begun treatment.