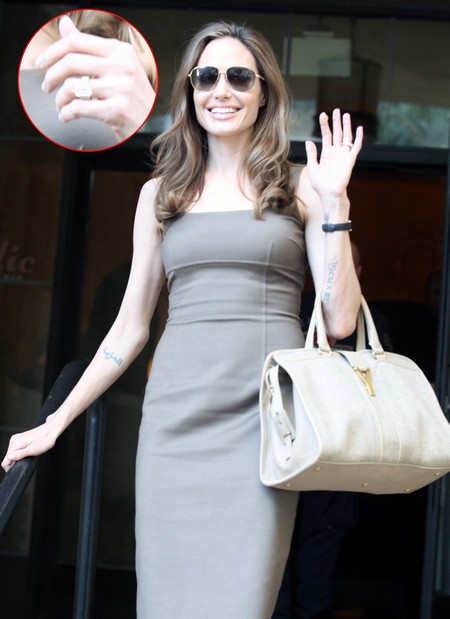 It has taken seven years for Brad Pitt to actually propose to Angelina Jolie, and he made it formal with a stunning engagement ring.  But ungrateful Angelina is hates the rock and refuses to wear it!  If this is an omen of what is to come in their marriage perhaps Brad would be wise to stay single.

As was reported a few weeks back, Brad worked with jeweler Robert Procop to design the $500,000 sparkler especially for Angelina.  Her ring was conspicuously absent during a trip to Ecuador because she claimed it was inappropriate to wear in the field.

In her newly appointed role as Special Envoy to the United Nations High Commissioner for Refugees Angelina might feel self-conscious wearing a jewel that is worth more than the GNP of the people she is supposedly saving.  How do you spell condescension… A-N-G-E-L-I-N-A!

In Touch Weekly Print Edition, May 14 has more on the ring debacle.

It’s only been a few weeks since Angelina Jolie and Brad Pitt announced their engagement. But as she met with the foreign minister of Ecuador on April 22, the ring finger on her left hand was noticeably bare. While some claim she thought the $500,000 sparkler wasn’t appropriate for a serious meeting, everyone knows that engagement rings are meant to be worn always. So why did Angelina really ditch the ring that Brad helped design himself?

“She isn’t fond of it,” a friend confides. “Nothing against Brad’s design. She’s just never been enamored of white diamonds.”

Indeed, the friend says Angelina had been hoping for a less traditional stone.

“Emeralds are her favorite.” And she’s been complaining that Brad’s choice of the 10-carat diamond, rather than an emerald, “shows how little he knows her.” Of course, her hissy fit over the ring shows a lot about her, as well.

“She’s so demanding,” an insider says. “She’s acting like a bridezilla.”

Do you think it made sense for Jolie to leave the ring at home while working with poor refugees?  Or do you think she really doesn’t love the rock?  Could it be that Angelina is simply auditioning for Bridezilla redux?  Let us know your thoughts in the comments below.