Usher And His Brother James Lackey In Courthouse Drama 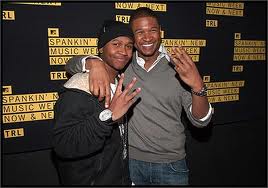 Usher and his brother, James Lackey, (no, not Justin Bieber!) are both getting hussled off to court by their women, or ex-women, that is.  Baby Mama Drama, Usher’s half-brother, James Lackey, is catching the drama from his child’s mother Martina.  Now James was arrested last year for abusive behavior toward Martina.  James is now stating to the court system that he cannot keep up the $1,300 a month child support that he is ordered to pay, so back to court they go.

Needless to say she is furious because according to her he owns a recording studio and lives a fabulous life so she doesn’t understand why he is asking for her child’s support to be lowered.  Honestly I don’t get that either but the two of them have bad blood between them so do you think it might be spite, Hmm…

Moving right along to his brother Usher, he’s going back to the court house too.  This family seems to spend a lot of time in family court.  Usher’s ex-wife, Tameka is trying to take him to court on a number of reasons.

Before I mention them let’s go on the record – no one liked this witch of an ex-wife (witch…that goes along with ….you got it) at all.  Let’s list the reasons she wants to take him to court for in order to get FULL custody of both of their sons. She says that she has no say so in hiring nannies in his house and wants the kids over Christmas, etc.  They were only married for two years and in that amount of time she managed to have 2 kids, talk about fast work.

This little bit of complaining she is doing and all this going back and forth to court is just that annoying complaining by an ex that just wants to be a pain.  Tameka, sit down look around your comfortable setting, (and I know it is) and just calm down.  Sit down and shut up!