Vanity Fair Has The Hottest Actors In Hollywood Covered 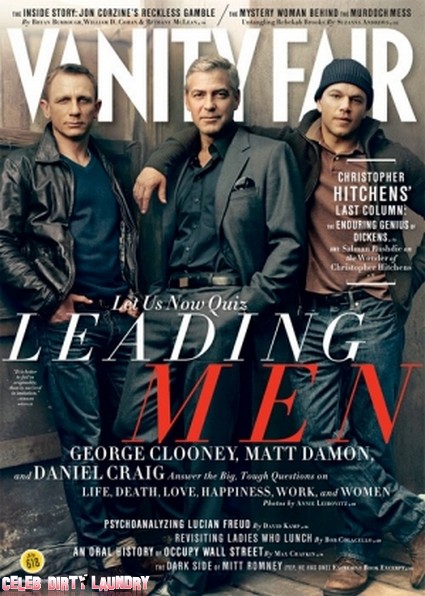 The cover of Vanity Fair‘s February issue – which hits newsstands in New York and Los Angeles today –  is hot, hot, hot! It features George Clooney, Matt Damon and Daniel Craig. You get three for the price of one!

The trio were photographed by celebrity favorite Annie Leibovitz. The current James Bond is looking effortlessly cool in a casual leather jacket and jeans. The gorgeous George is wearing a suit. While the former Jason Bourne is looking a little lumberjack. Either way it’s one seriously hot cover.

These guys are the most wanted men in Hollywood right now. First up there’s the current 007. Daniel Craig has already had two outings as the most famous secret agent in the world and James Bond will be back in 2012. Skyfall is due for release in November. It’s a role he’s going to be playing for a long time – he’s signed on for five more movies. Craig is also winning fans in the American remake of The Girl with the Dragon Tattoo.

George Clooney can do no wrong in the movie business. The 50 year old does it all – he’s an actor, director, producer, and screenwriter. He’s getting plenty of awards for The Descendants. Recent movies include The Ides of March. He’s also winning in his personal life. He seems to be very loved up with Stacey Keibler.

Then there’s Matt Damon. The all round nice guy who’s happily married with four kids. He’s currently on the big screen opposite Scarlett Johansson in We Bought A Zoo. The 41 year old also voiced a character in Happy Feet 2.

So  there you have it – a cover to drool over and even more pics inside of our favorite leading men.