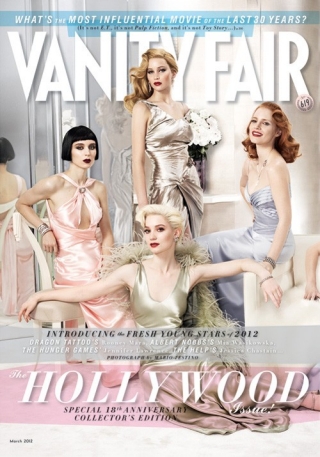 The Hollywood Issue of Vanity Fair is here and there’s only one word that can sum up the classy cover: glamorous. The 2012 Hollywood Issue features not only glamorous starlets, but works to display the sheer amount of diverse, feminine talent currently present in the acting world. Let’s take a look at who made the feature!

Jennifer Lawrence, an upcoming star whose life will be (I’m sure of it) forever changed once The Hunger Games hits the theaters on March 23rd.

Rooney Mara, that badass woman who had that special tattoo across her back. I think it was a fluffy unicorn–er, I mean dragon. The movie not only put her on people’s Celeb Radars, but landed her a well-deserved Oscar nomination.

Mia Wasikowska, who brought the literary world of Jane Eyre to life like it’s never been done before.

Jessica Chastain, who starred in The Help and is finally getting some attention. Good for her. She deserves it. She was one of my fave characters in the movie . . . the bubbly, friendly, accepting gal from Sugarditch.

Elizabeth Olsen, sister of the Olsen Twins who proved to the world she had some serious acting chops in her breakout film Martha Marcy May Marlene.

Adepero Oduye, star of the film Pariah. She was a med student before finally deciding to pursue her passion: acting.

Others featured in the issue include: Shailene Woodley, Paula Patton, Brit Marlin, and Lily Collins.

Some of the ladies sat down for exclusive interviews, including one of CDL’s celeb crushes, Jennifer Lawrence.

“I’ve made a lot of faux pas, and will continue to. I don’t think there are a lot of jobs out there in the entertainment industry that I can do, since I don’t even have a high school education, pretty much…but I’d love to direct. I love all the angles of filmmaking. But I’m pretty happy where I am.”

J-Law should be very happy where she is at right now, especially since she’s the star of the film industry’s next biggest money-making franchise.

What do you think of the March 2012 issue of Vanity Fair? We think it’s sparkly and glittery and pretty. But that’s just us. We simply like shiny things.

Leave your comments below and don’t forget to click on the pics to take a closer look!