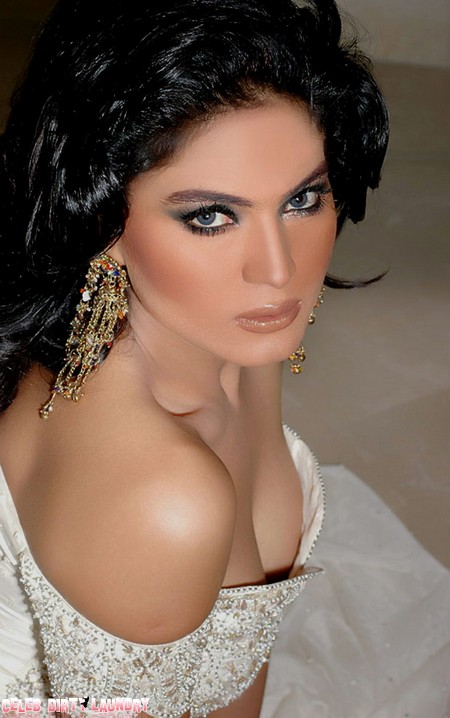 Bollywood actress Veena Malik is no stranger to controversy. The native Pakinstani often finds herself under fire in India, where she now lives, for her relationship choices and film roles.  Then there’s the fact that the 28-year-old star has a pretty big mouth. None of that smiling and doing as she’s told crap for her.  Veena insists on living like a modern Western woman, but she isn’t in the West…

Veena’s nude cover photo on FHM India brought down the wrath of much of the Islamic world upon her pretty shoulders and earned her public disownment by her dear papa back in Pakistan.

Veena speaks her mind and has no fear when it comes to supporting causes that are generally kept under wraps in India and in the Muslim world. Back in June Veena did a photo shoot in support of gay and lesbian rights. She believes that there should be equality and civil rights exercised towards the LGBT community. A few months after the hotly debated photo shoot there is new word that Veena is set to drop an album devoted to lesbianism. A source says,

“Bollywood Starlet Veena Malik has now turned a singer and had done an album to supports Lesbian. “Drama Queen” the First single album of Veena Malik. The album is going to portray the relationship of homosexuality. The Album is very sexy, hot and gamy there were Veena was seen kissing her female love partner. The Album Video is going to cause a fire within her lesbian fans. “This song was an excuse to put every lesbian cliché and stereotype we could think of into one song. The album specially dedicated to my Lesbian and Homosexual fans as I personally support them. As for my first single it’s the best of all”, said Veena. The interesting thing about this album is that it is about a woman that is in love. But the singer is saying that she is not interested in the woman that way. Now let’s see how much people like the Veena Malik album and how it affects her homosexual fans.”

Veena has long been super-appreciative of her Bollywood fans and the fact that she has been loved and accepted by her adopted country of India. There is no way that the star could get away alive with these types of things in her home country of Pakistan. There, women must be covered and she’d likely be killed for supporting LGBT rights openly.

Do you think her adopted countrymen will continue to embrace her after this album is released? Has she gone a bit too far or is it her fearlessness that the fans admire most? Do we realize in America how lucky we are and how hard we have fought for the freedoms we have? Tell us your thoughts in the comments below!