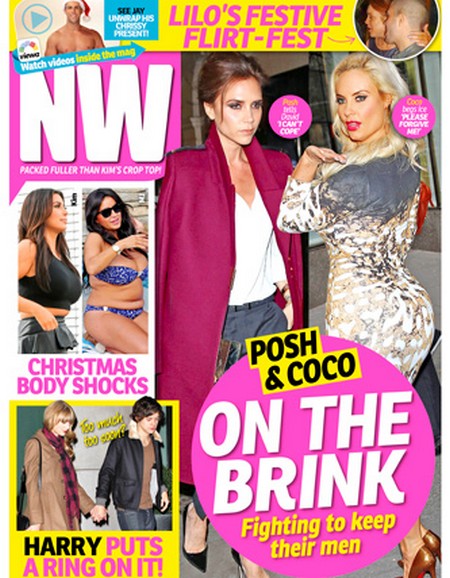 David and Victoria Beckham, the mainstay of pop culture couples, are allegedly having trouble in paradise. Over recent years, the Beckham tribe leaders have been quietly going on with their daily lives without any massive ruptures in the skin of their relationship. However, according to NW magazine, septicemia is setting in and this organ is about to hemorrhage.

The magazine cover features a morose Victoria Beckham drooling in the cold, looking as maudlin as a nun at a stripper convention. The cover states that Vic is “fighting to keep [her] man”, but does not show any evidence that the two are on a one-way trip to Splitsville. If you have the memory of an elephant, and/or you were alive back then, you might remember that David had a bit of a fling with his personal assistant, Rebecca Loos (she’s very, very loose), and almost caused the entire Beckham kingdom to rip apart at the seams. Fortunately, Vic stayed with her man and kept the relationship afloat. Unfortunately, Beckham is one of the most adored and most lusted after men on the planet.

Women (and men) have been throwing themselves at Beckham throughout the entirety of his career and made him not just a UK footie star, but also an international male supermodel and celebrity. Their relationship has been over-analyzed, discussed, and tossed in the rumor mill of public opinion for as long as their Beckham brand has existed. We doubt there’s trouble in paradise though, as both of the Beckhams have learned from their past mistakes and moved on from their respective indiscretions.

This is nothing new. Understand, David is like a yo-yo – he jumps back into the public image with each and every sweltering ad, causes a small baby boom in the back alleys of Middle America, and then returns to the gossip pages of a sweaty magazine. This is how his career works. It’s a tried and trusted method of giving and receiving. Their relationship, according to gossip tabs, will always be on the brink of extinction.

Good luck with bending this one like Beckham, Beckhams.