Want Justin Bieber To Come To Your School? Watch This Video! 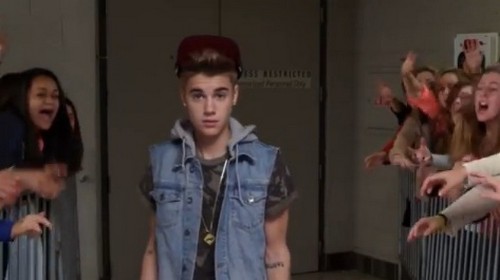 Apparently Justin Bieber does have other things on his mind besides the status of his relationship with Selena Gomez. The superstar tweeted about his latest big announcement today and included a video that had Justin’s audio muffled by the shrieks and screams of his most vocal teen fans. In a great bit of cross promotion, you had to go to Justin’s Facebook to actually hear what he was saying beneath the squeals. It’s about his involvement in an organization called Pencils of Promise and this is what exciting news Justin couldn’t wait to share,

“Thank you so much for giving me the chance to be heard and I’m going to give you the chance too. There’s an organization I really believe in called Pencils of Promise. They build schools all around the world who don’t have access to a quality education. So here’s the deal. With every $25 donation raised by the students of your school, you’ll educate another child and get the chance to win great prizes like ME coming to YOUR school. Once a day, there’s 61 million children who need your help, so join the movement of student for students and make your voice heard.”

I can only imagine an auditorium in the middle of America in Anytown, USA rocking out to a lunchtime concert by Bieber, as the girls screech and the guys roll their eyes. Still, it’s great that Justin (or his PR team) has decided that it’s really important to use some of the celebrity status to accomplish something good. I’m not sure that I’m convinced that Justin actually cares about the kind of education that other kids have access to- hell, I’m not convinced that he cares about anything more than performing, blowing his cash and finding a new chick to spork on the DL- but that’s just me.

Are you impressed by Justin and other celebs when they make an attempt to impact a group that needs a bit of help such as Pencils of Promise? Do you think they actually care or is it more about wanting people to think that they do? Tell us your thoughts in the comments below!