Was Kanye West The Lover Of Frank Ocean? 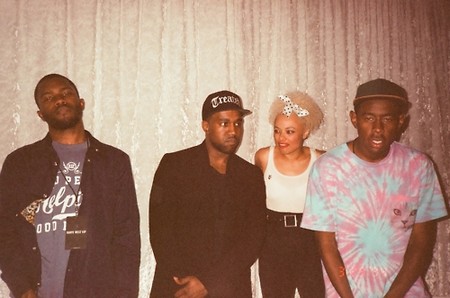 Yes, we know Kanye West and Pharrell Williams weren’t nineteen in the summer of 2007 (sounds like a Bryan Adams song gone wrong), but many pundits and Scientologists believe that this was a cover-up. Could it be? Say it isn’t so! Frank is known as one of Kanye’s protégés and he views Pharrell Williams as his idol.

Kanye West, who is currently dating fame whore socialite Kim Kardashian, told interviewers a while back that “[T]here’s no such thing as a bisexual guy, if a guy is bisexual, that makes him gay. Don’t try to re-term it or something like that.”

Whatevs Kanye, or should we call you Dr. Kinsey?

Please go tell that to your local LGBT community support center. They will love hearing your prejudiced view.

Kanye also tries to explain in this interview why he is a heterosexual man, as if heterosexuality can be summed up at a tea and scones breakfast for elderly women who watched too many episodes of The L Word.

Kim Kardashian will most probably rip out her extensions and suck on her thumb if this deems to be true. She is cray-cray like that and we bet you after Kris Humphries, the reality television star will suffer from a nervous breakdown quicker than you can say “sex addicts at a Playboy convention”.

Kanye West is the magnum opus of the Controversy-R-Us factory, so if it is revealed that he was the lover of Frank Ocean, he will most probably end up punching Taylor Swift in the throat this time.

What do you think readers? Was Kanye the lover of Frank Ocean?