Was Star Jones Ambushed On The View? 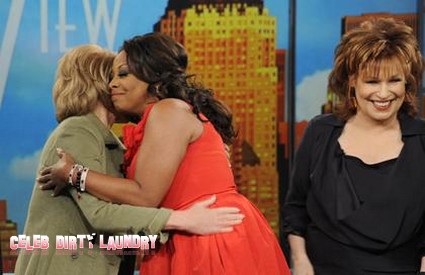 Star Jones made her return to The View yesterday as a guest, and let’s just say that it wasn’t all hugs and kisses.  A day after her visit, Star appeared on the Today show this morning with colleagues Donny Deutsch and Dr. Nancy Snyderman for a Today’s Professionals panel discussion, and Donny made it quite clear that he was less than pleased with the way Star had been treated.

He said that Star was “ambushed” and that “It was cruel … I felt like I was watching the mean girls in the seventh-grade cafeteria take on a vulnerable girl. They went at her … It was cruel, and I think they owe her an apology.”

Star, for her part, thanked him “for having my back. But I want you to know I got a platform to talk about heart disease, and I never get a chance to do that. And I went ahead and did it. I’m a big girl and I know how to take care of myself. But it’s really important for me to have shown the world that I moved on.”

While Star had returned to The View to discuss her campaign to raise awareness of heart disease in women, it was her first time back since she abruptly left in 2006 and Barbara Walters didn’t waste any time in plunging into the controversy behind her departure.

Was Star treated unfairly?  Anyone who watches the show knows that the women of The View don’t hold back.  Star had to know that there would be some hard questions, and she’s a tough cookie.  And like she said, she got her point across and that’s what matters.