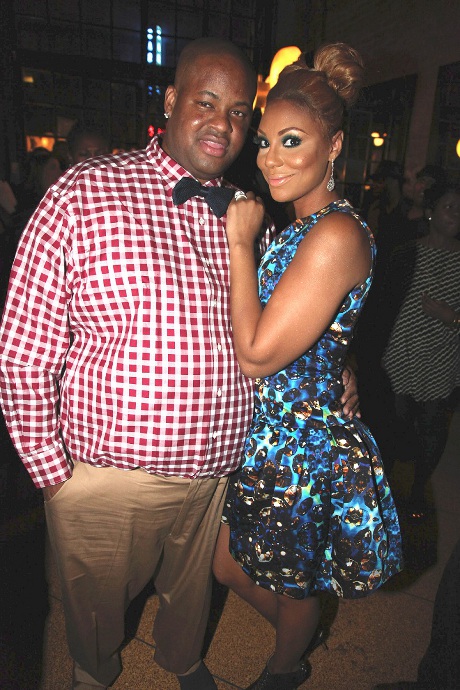 Celeb Dirty Laundry was honored to be invited to WE tv‘s fabulous celebratory bash that promoted their new spin-off series Tamar & Vince, which documents the lives of Tamar Braxton and her music mogul husband Vince Herbert. The super fantastic party took place at the super hip and trendy Caulfield Bar where more than one-hundred guests showed up to show their support for the new docuseries.

The party definitely got bumpin’ after DJ Fadelf started spinning his tracks and everyone began sipping their delicious cocktails. With so many people in attendance it was hard to keep track of everything going on, but the pink candies and cupcakes without a doubt left an impression on everyone.

But the star of the night was definitely the new show. Here’s a little bit more about the show in case you’re interested in checking out next week’s episode:

“This much-anticipated new series finds Tamar and Vince with a young marriage, a new home, and a fresh new set of challenges. There’s Miracle, Vince’s dog, who’s the love of Vince’s life, but needs a little discipline. Then there’s their beautiful new home, which is a blank canvas in desperate need of furnishing and décor. Tamar wants to get the house done, but that’s not her priority. For now, she’s anxious to finish her solo album and begin her meteoric rise to superstardom. However, she often finds herself at odds with her music mogul husband Vince, who is as equally headstrong and passionate as Tamar. As Vince hustles to line up fame and fortune for Tamar and his other artists, he has another health scare, and the power couple is forced to slow down and re-prioritize.”

The first episode already premiered, but don’t forget to check out Tamar & Vince next week at it’s original 9pm timeslot on Thursday, September 27! Meanwhile, check out the stellar pics from the event in the gallery below!

Image credit to Johnny Nunez/Courtesy of WE tv; Alicia Roberts