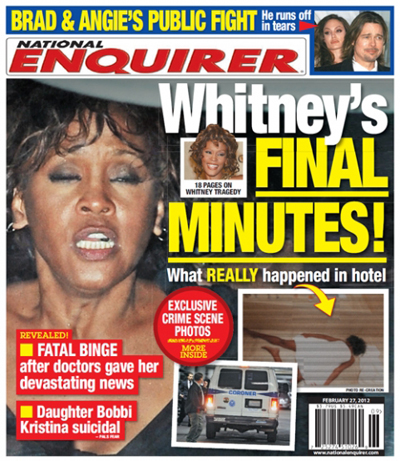 The current issue of The National Enquirer features a cover story about Whitney Houston titled ‘Whitney’s Final Minutes,” in which the tabloid claims to know what really happened to the late singer in the minutes and hours before her death at the Beverly Hilton Hotel this past weekend.

In addition to exclusive crime scene photos, including one of of what looks like the singer lying on the floor in the bathroom after she was found dead, the magazine also alleges that Whitney had received some “devastating news” that caused her to binge on the drugs that reportedly led to her supposed fatal overdose.

Sadly, there seem to be a lot of reasons that Whitney may have been seeking solace in prescription pills and alcohol. Chief among them were her supposed financial issues, her rumored violent relationship with her boyfriend Ray J, as well as the report that her vocal cords, which gave Whitney her amazing singing ability, may have been irreversibly damaged by years of drug abuse.

Could these issues have weighed on Whitney’s mind in the moments before her death?

To find out more – pick up the current issue of The National Enquirer for all the details!